Pooper:
Dalton kills Wesley’s gang, but spares Wesley. The townsfolk then kill Wesley when he tries to kill Dalton, freeing themselves from Wesley’s reign of terror. Dalton and Doc decide to stay together in the town.

Long Ending:
Dalton (Patrick Swayze) is one of the best bouncers in the US. He is hired by a bar owner named Tilghman to rehabilitate his bar in a small, Missouri town. Dalton arrives to find the bar full of drug dealers and brawlers. He begins making changes, including firing many of the corrupt and incompetent staff-members. The bar soon begins to attract a lot of business and the riff raff is largely cleaned out. Although he works in a violent profession, Dalton states that “nobody wins” in a fight.

Dalton begins befriending the local townspeople (mainly hard-working small business owners) and romancing a local doctor named Doc (Kelly Lynch). Dalton’s work brings him into conflict with uber-wealthy gang leader Brad Wesley (“Ben Gazzara”). Wesley forces all the townspeople to pay him “protection” money and also has a monopoly on local liquor sales. Wesley takes credit for building up the town, noting that he brought a 7-11 to the town and is negotiating a deal for J.C.Pennys to open up shop. Dalton rebuffs Wesley’s offer to work for him, has Wesley’s corrupt bartender-nephew fired from the bar, and finds a way to import liquor when Wesley stops selling it to the bar. Realizing that Wesley will use his group of thugs to intimidate him, Dalton convinces his best friend and fellow bouncer Wade Garrett (Sam Ellioty) to move to the town and help him maintain order.

Through Wade, we learn that Dalton killed a man in a fight (by ripping his throat out) who turned out to be Dalton’s then-girlfriend’s husband (Dalton didn’t realize his girlfriend was married). Though Wade urges Dalton to get over the event and get serious with Doc, Dalton remains worried that his rage will overtake him and/or Doc may hurt him like his previous girlfriend had. Unable to run Dalton out of town, Wesley takes out his vendetta on the townspeople. He blows up one townsperson’s business and uses a monster truck to destroy the business of another. Things culminate in Wesley’s head goon blowing up Dalton’s landlord’s house (almost killing the landlord, a kindly old farmer). Dalton tracks down the head goon and kills him by ripping out his throat with his bare hands. Doc is disgusted by Dalton’s violence and runs off.

Dalton goes to find Wade and leave the town. However, he discovers that Wesley has had Wade killed. With nothing left to lose, Dalton raids Wesley’s estate and kills almost all of Wesley’s henchmen. He and Wesley fight, with Dalton getting the upper hand and preparing to rip out Wesley’s throat. Before he does, he takes a deep breath and spares Wesley’s life (not knowing that Doc has been watching the whole thing). As Dalton walks away, Wesley picks up a gun and tries to shoot him. The townspeople (who had followed Dalton to the estate) emerge and shoot Wesley dead before he can fire at Dalton. Doc embraces Dalton and they are shown as a committed couple living happily in the town that is now freed from Wesley’s control. 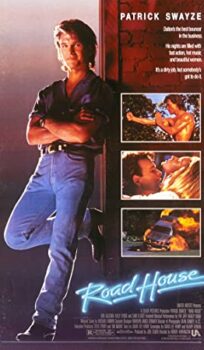