The Duke of Argyll (Andrew Keir), motivated by his finding out of Montrose’s (John Hurt) ploy to frame him, decides to set up a duel to the death between Rob Roy (Liam Neeson) and Cunningham (Tim Roth); the set conditions are that, if Rob wins, his debt with Montrose will be forgiven, but, if Cunningham wins instead, the Duke will have to pay Rob’s debt to Montrose. Also, both Rob and Cunningham agree to “no mercy or leniency” towards the defeated.

The swordfight ensues; Cunningham repeatedly slashes Rob during it, thus seemingly getting the upper hand. When it seems that Rob might actually be defeated and killed -they both bring up the “no mercy” rule again, while at it- and Cunningham comes at him wielding his smallsword (at a signal from Montrose), Rob grabs and holds the tip of Cunningham’s sword, which gets embedded in his left hand. This time, as Cunningham struggles to recover the use of his weapon, Rob gets the upper hand and delivers a massive blow that slashes Cunningham’s left shoulder and chest, killing him. Both The Duke and Montrose reluctantly acknowledge this victory.

The film ends as Rob reunites with his wife Mary (Jessica Lange) and their two children. 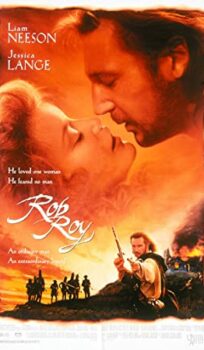