After revealing himself at an archery contest and then winning it, Robin (Cary Elwes) is arrested by the Sheriff of Rottingham (Roger Rees) and sentenced to death. In a move to spare Robin’s life, Marian (Amy Yasbeck) tells the Sheriff that she’ll marry him.

The Merry Men stop the wedding ceremony and save Robin, but the Sheriff retreats with Marian to the castle tower to deflower her. Robin heads after him, and there, the two cross swords. In the midst of it, the Sheriff cuts off Robin’s necklace carrying the key to “the greatest treasure in all the land.” The key’s container gets broken open, and the key falls into the keyhole on Marian’s chastity belt, proving that Robin is Marian’s true love. Robin ends up running the Sheriff through with his sword, albeit by accident.

Latrine (Tracey Ullman) then shows up, and after seeing the state that the Sheriff is in, she offers to give him a magic pill that could save his life. However, she would only give it to him if he agreed to marry her. Despite being repulsed by her ugliness, the Sheriff agrees to it, and he swallows the pill and the sword is removed. Latrine then gleefully drags the Sheriff away, who is already regretting his decision. Robin and Marian then try to celebrate by unlocking the chastity belt, but Broomhilde (Megan Cavanagh) barges in and tells them that they must get married first.

Robin and Marian head outside and find Rabbi Tuckman (Mel Brooks), and they ask him to quickly marry them. Before he can finish, King Richard (Patrick Stewart) returns from the Crusades. He takes his crown back from Prince John (Richard Lewis) and then orders him imprisoned in the Tower of London. Richard tells Robin that his family’s rights and lands will be returned to him and he would rule Sherwood from this day forth, and then he knights him. Tuckman finishes marrying Robin and Marian, and then Robin appoints Ahchoo (Dave Chappelle) as the new Sheriff of Rottingham. The newlyweds go off on their honeymoon, but when they attempt to consummate the marriage, Robin finds that the lock on the chastity belt won’t open, and he is last heard calling for a locksmith. 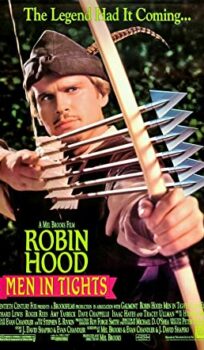