RoboCop (Peter Weller)– free of all directives due to shocking himself with an electrical current –attacks Cain’s (Tom Noonan) hideout and severely injures Cain. Cain is sent to the hospital, where Dr. Faxx (Belinda Bauer) takes him off of life support and extracts his brain to put in the new RoboCop 2 cyborg.

Hob (Gabriel Damon) takes over the Nuke distribution ring from Cain, and he and his gang meet with Mayor Kuzak (Willard Pugh), promising to give him the money needed for the city to pay off its debt to the OCP only if he agreed to a hands-off policy to the distribution of Nuke. The OCP, who knew of the deal and felt that this would hurt their attempts to take over Detroit, deploys the RoboCop 2 cyborg to disrupt the deal and kill all parties involved. All except Kuzak get killed, Kuzak escaping through a sewer.

Later that night, the OCP holds a press conference in their building, where they announce the construction of Delta City, a new city designed to replace Detroit. They also present RoboCop 2 at the event, but when the OCP president (Dan O’Herlihy) unwittingly presents a canister of pure Nuke in front of it, it attempts to seize it and soon runs amok when it doesn’t. RoboCop arrives, and he and RoboCop 2 fight from the top to the bottom of the OCP building, eventually ending up in the streets outside. While the cops have a massive gunfight with RoboCop 2, a lot of officers dying, RoboCop re-enters the OCP building and comes back with the canister of Nuke.

He gives it to Lewis (Nancy Allen), who hands it to RoboCop 2, and the cyborg takes it into itself. As it is distracted by the absorption of the Nuke into its systems to alleviate its pain, RoboCop jumps it from behind, and eventually breaks into the cavity where Cain’s brain is stored. He rips it out and smashes it on the ground, truly killing Cain and putting RoboCop 2 offline for good.

The OCP president, along with executive Johnson (Felton Perry) and lawyer Holzgang (Jeff McCarthy), discuss OCP liability for RoboCop 2’s actions, and decide to make Dr. Faxx their scapegoat by saying that she acted without company support in designing RoboCop 2. Lewis laments over the fact that OCP will no doubt escape the legal repercussions of this incident, to which RoboCop replies: “Patience, Lewis. We’re only human.” 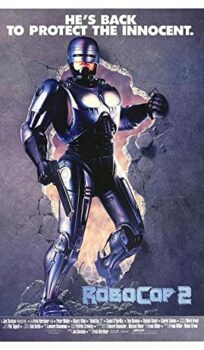