SHORT VERSION:
Just before Athena engages in robot combat with Alexander, she plays the tape file Matsumoto made detailing the new weapons installed into the robot for this match, and it soon plays the video Matsumoto secretly recorded where he got Tex to admit to being the Confederation’s spy and then shows him getting murdered by him. Tex subsequently runs away and commits suicide.

Athena quickly loses the fight, but Alexander is keen on killing her, so he refuses to leave the battlefield and eventually crushes the referees’ platform, forfeiting his victory to the Market. Achilles gets Athena out of the robot and takes command of it, and he and Alexander have a lengthy battle until they destroy each other’s robots. They then have a hand-to-hand fight with pieces of wreckage until Achilles convinces Alexander to stop, saying that they can both live and that these matches don’t have to end with the death of a robot jock. They then do the “crash and burn” fist bump, which is a gesture of peace.

LONG VERSION:
When Achilles (Gary Graham) sees Athena (Anne-Marie Johnson) on TV being promoted as Alexander’s (Paul Koslo) next opponent, he decides to return to action and take the rematch with Alexander, feeling that she won’t be able to beat him and he didn’t want to see any harm come to her. This infuriates her, and she confronts him and demands to know why he came back, but he won’t tell her.

The night before the match, Matsumoto (Danny Kamekona) is preparing a tape file in the lab detailing the new weapons he installed in the robot for the match when Tex (Michael Alldredge) stops by, wanting to know why he was being left out of the loop on the weapons briefing. Matsumoto shows him that he had analyzed Tex’s last robot fight and figured out that he won it not by making a “lucky” laser shot as he always claimed, but by deliberately shooting at a small crack in the Confederation robot’s armor. He then pulls a gun on Tex and accuses him of being the Confederation’s spy, saying that he took that job in exchange for them giving away their robot’s weakness to him. Tex doesn’t deny it, but then he takes the gun from Matsumoto. After some more chit-chat, Tex kills him, then puts the gun in his hand and calls Commissioner Jameson (Robert Sampson) and tells him that he discovered that Matsumoto was the spy, and after he confronted him about it, he went back to his lab and shot himself. However, Tex is unaware that Matsumoto had secretly recorded his confession and the murder on the tape file.

Just before the match, Athena visits Achilles in his room under the pretext of wishing him luck, then injects a sedative into him. He fights back, however, and tells her that he took the match to protect her, but she ends up knocking him out and locks him in the room. She then takes his suit and masquerades as him in order to get into the robot, but her true identity gets revealed just as she reaches the cockpit. Despite the Market team’s efforts to stop her, she takes command of the robot and gets onto the battlefield to face Alexander.

Achilles – who by this point has regained consciousness, freed himself, and joined the Market team in the control room – decides that the team must help Athena win, so he instructs her to play Matsumoto’s tape file. When she does, it soon displays Matsumoto’s recording of Tex’s criminal acts. Tex is placed under arrest, but he overpowers the arresting officers and runs off and commits suicide.

Though Athena succeeds in taking off one of the arms of Alexander’s robot, Alexander quickly proves to be too strong for her and easily defeats her, but he is intent on continuing the assault. Achilles leaves the control room and goes out onto the battlefield to get Athena out of the robot, and before he enters it, he yells to Alexander that he is going to get the robot running again and then kick his ass. Achilles gets the suit off of Athena, and she kisses him before medics come and take her away.

Alexander is told by the referees to leave or risk forfeiting the match to the Market, but he refuses to listen to them (and to the Confederation’s Commissioner), wanting to kill another of the Market’s jocks. He disconnects his transmission with the Commissioner and then crushes the referees’ float platform. Commissioner Jameson tells Achilles to not fight Alexander since the Market has now won, but Achilles ignores him, since this fight has now become personal.

Achilles and Alexander do battle (which goes into outer space and back), but Alexander gets Achilles into a disadvantageous position and attempts to kill him. Achilles gets out of his robot just in time, and as he avoids more of Alexander’s attacks on foot, he notices the earlier severed robot arm nearby. Remembering that the hand launches like a rocket, he goes inside it and crosses some wires on a control panel to launch the hand, which flies right into Alexander’s robot and destroys it.

However, Alexander soon jumps Achilles from behind, having miraculously survived the explosion, and they engage in hand-to-hand combat with pieces of wreckage. In the midst of the fight, Achilles throws away his weapon, and he successfully convinces Alexander that these matches don’t have to end with a jock getting killed. The movie ends with them saluting each other with the “crash and burn” fist bump, which is a gesture of peace. 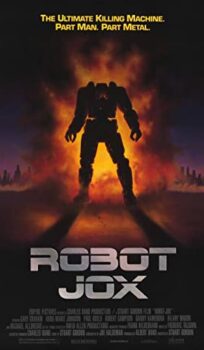