Danny (Paul Rudd) and Wheeler (Sean William Scott) get kicked out of the Sturdy Wings program after Danny accidentally gets Augie (Christopher Mintz-Plasse) kicked out of his live action role-playing group and Wheeler loses Ronnie at a party. The two of them face thirty days in prison without their last 11 hours of community service completed.

Wheeler tells Ronnie that he is sorry and still wants to be his friend after he gets out of jail, and Ronnie accepts. The two then join forces with Danny to get Augie back into the role-playing group in time for the end-of-year battle, forming their own Kiss-themed group. Augie defeats the King and becomes the new ruler of the gamers, until the girl he has had a crush on the whole movie comes out of the bushes and “kills” him — making her the game’s new Queen.

Because of all this, Danny and Wheeler miss their hearing that Beth (Elizabeth Banks), Danny’s ex-girlfriend had gotten for them. But Beth gets to the battle and sees what Danny was willing to do for Augie, and after Danny serenades her at the after-party the two of them get back together.

Augie’s mother and step-father also show up looking for him, see him in action, and decide that his role-playing isn’t as girly as they had expected. The girl Augie likes asks him to be her King and the two kiss.

Gayle (Jane Lynch), the head of Sturdy Wings, was with Augie’s parents, and is impressed with Danny and Wheeler. She tells them that she knows the judge from her days as a crack-addict and will make sure that they don’t have to do any time. 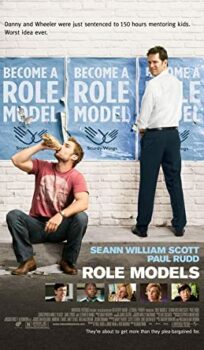