POOPER:
Rane tracks down the criminals who killed his wife and son to Mexico. He leaves Linda behind and takes John with him. They get into a shootout at a whorehouse, where Rane kills Fat Ed and Automatic Slim, while John takes out T-Bird and Melio. With everyone dead, Rane and John walk out of the brothel and head home.

LONG VERSION:
Set in 1973, Air Force Major Charles Rane (William Devane) is one of several soldiers flying home to San Antonio after spending the past 7 years in Vietnam as a POW. Among the other former POWs returning home is Army Sergeant John Vohden (Tommy Lee Jones), and he and Rane have become friends. Rane is met at the airport by his wife Janet and son Mark, but it’s apparent the long separation as taken a toll on the family. Mark does not remember his father, and Janet, thinking her husband was never coming home, is now engaged to their police officer friend Cliff and wants a divorce from Rane. A few days later, the civic leaders host a homecoming for Major Rane, and among the gifts given to him are a red Cadillac and 2,555 silver dollars, one for each day he was a POW. Miss Texas Belle Linda Forchet (Linda Haynes) is the one who gives Rane the gifts, and she clearly has a crush on him.

A couple of days later, Linda sees Rane and invites him for a drink. At the bar, Linda is constantly flirting with him, but Rane turns down her advances. Afterwards, Rane returns to his home, but there are four men waiting for him, demanding he give them the silver dollars. He refuses, so the men begin to torture Rane. He begins to have flashbacks to his days as a POW, so he is just as unresponsive to the criminals as he was to his captors. The four, named Fat Ed (James Best), Automatic Slim (Luke Askew), T-Bird, and Melio, decide to place Rane’s hand into a garbage disposal and turn it on, permanently mangling his right hand, but he still won’t give up the silver dollars. Janet and Mark return home at this time, and the criminals take them hostage. With Rane laying on the kitchen floor unable to help, Mark gives the men the silver dollars. After Ed tells T-Bird and Melio to meet up with them in Nuevo Laredo, Mexico, he and Slim then shoot all three of them and leave. Rane survives, but Janet and Mark are killed.

Six weeks later, Rane is still in the hospital and now has a prosthetic hook for a right hand. John visits Rane, and tells him that he is nothing without the military so he is reenlisting. Linda also visits Rane, and tells him that she has feelings for him, and if he needs anything, just ask. Finally, Cliff, who is still investigating the attack on the Ranes, visits and asks if he remembers anything about the men who did this to him. Rane says no, but in reality he remembers the criminals are in Mexico and plans to go after them as soon as he can. Once he’s home from the hospital, Rane takes his double-barreled shotgun and saws off the end. He also sharpens the prosthetic hook and he heads out. Before going to Mexico, Rane visits Linda at the bar where she works and invites her to come with, and she says yes, thinking it’s a vacation.

After driving all night, they arrive in Nuevo Laredo. Rane and Linda go to a seedy bar looking for Fat Ed, but instead they meet a guy named Lopez. He begins harassing Linda, but Rane stops him and finds out that Automatic Slim is in Acuna. They go there and Rane learns from a guy at another seedy bar that Fat Ed and the others are now in El Paso. Soon after, Slim shows up at the bar and he and Rane get into a fight. Slim has the upper hand, but Rane is able to get away by stabbing Slim in the crotch with the prosthetic hook. By this time Linda has figured out that Rane’s trip is to exact vengeance and not a vacation, but she continues to help him anyway. Meanwhile back in San Antonio, Cliff goes to the Rane house and finds the end of the shotgun that was sawed off, and he quickly figures out what Rane is up to. He tracks Rane’s Cadillac to Mexico and traces his path. Cliff ends up at the same bar in Acuna where Rane fought Slim, and he meets Lopez, the guy from the bar in Nuevo Laredo, and they get into a fight. Cliff ends up killing Lopez, but Automatic Slim was also there and he kills Cliff. Since Slim knows that Rane is going after the others, he joins them so he can be there to finish him off.

Rane and Linda are now in El Paso at a hotel, and she wants Rane to forget about getting revenge so they can run away together, but he doesn’t know what to say. The next morning, while Linda is still asleep, Rane changes into his Air Force uniform and leaves her behind at the hotel. Rane then goes to John’s home in El Paso and tells him that he found the men who killed his son. Immediately, John puts on his Army uniform, gets some guns for himself, and they head out. They arrive at a whorehouse, and a gunfight ensues. Rane takes out Fat Ed, while John kills T-Bird and Melio, and they both kill several others who try to stop them. At the end, there is a standoff between Rane and Slim, with Rane killing him by emotionlessly shooting him several times. The movie ends with Rane and John, both bloody and wounded, walking out of the brothel together and head home. 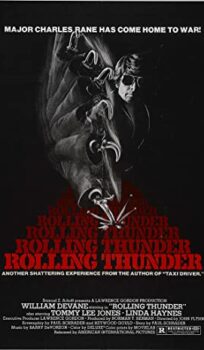