Joan Wilder (Kathleen Turner) is a timid New York romance novelist who rarely leaves her apartment.  She has to take a map to Colombia, or her sister will be killed by gangsters.  The map shows the location of a precious emerald.  She gets lost in the jungle and ends up with Jack Colton (Michael Douglas), who is living there trapping wild birds.  Jack convinces her that they should follow the map and get the treasure themselves, before turning it over.  Joan accepts, although she is never sure she can trust Jack.

Jack and Joan get the emerald.  They go to turn over the now useless map.  However, one of the gangsters(Danny DeVito) had been tailing them and knows Jack has the jewel.  Jack tosses the jewel into the crocodile pen.  Zolo’s hand gets bitten off by a crocodile, that swallows the jewel.  Jack rescues Joan and her sister, then goes after the crocodile.

The movie ends with Joan in New York.  The story of her adventure has become the plot of her latest novel.  In the novel, Jack disappears and she never sees him again.  However, when Joan leaves her building, Jack is there to get her, with a big sailboat on a trailer. 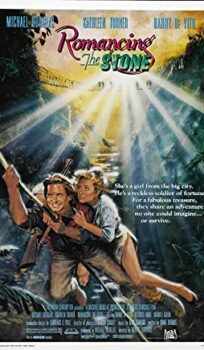