LONG VERSION
The classic story is told in a modern day setting. Verona is now Verona Beach, and swords, daggers, and rapiers are now brand names of guns. The Capulets and Montagues are rival families that are in the construction business, and they have been feuding for a long time. The feuding mostly involves the cousins of Romeo Montague (Leonardo DiCaprio) and Juliet Capulet (Claire Danes), the only son and daughter of the respective families’ patriarchs.

Romeo and his friends get an invitation to a Capulet party, and it is here that Romeo and Juliet first meet. They instantly fall in love with each other. Juliet’s cousin Tybalt (John Leguizamo) sees Romeo at the party, and vows revenge against him for crashing their party. Despite learning that they are members of the rival family, Romeo and Juliet meet again that night and agree to marry the next day, even though Juliet is set to marry her father’s business partner. Father Laurence, the local priest and a friend of Romeo, performs the ceremony, with only one of Romeo’s cousins and Juliet’s servant as witnesses.

Later that day, Tybalt is looking for Romeo but he finds his best friend Mercutio instead. Mercutio defends his friend’s honor and duels Tybalt, but is killed just as Romeo arrives on the scene. An enraged Romeo then kills Tybalt, but is punished by Police Chief Prince by being banished from the city. A distraught Juliet, having been separated from her husband and still facing the prospect of marrying her father’s business partner, wants to kill herself, but is met by Father Laurence and is presented with an idea. If she pretends to be dead, she can be later reunited with Romeo and her family would never know. Juliet drinks a potion to mimic her death, and Laurence sends a letter to Romeo letting him know what is actually happening. However, Romeo hears of Juliet’s “death” and returns to Verona Beach before the letter arrives.

Romeo enters the Capulet tomb and sees Juliet. Believing that they can only be together again in Heaven, Romeo drinks poison that he received earlier that day just as Juliet awakens. Juliet sees Romeo die, and she then kills herself with Romeo’s gun. As their bodies are being pulled out of the crypt, Chief Prince admonishes the Capulets and Montagues by telling them that their feud has led to this, the deaths of their only children. 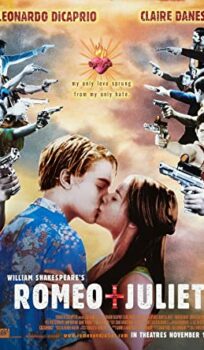