Even though, throughout the third act of the final game of the World Series, Henry (Thomas Ian Nicholas) trips and lands over his mighty arm, losing his gift just the same way he had gotten it originally, he and the rest of the team manage to keep going by pulling off some goofy shenanigans.  In the bottom of the 9th. inning, in comes monstruous player Heddo (Tom Milanovich); everything seems lost.

Then, Henry spots a mysterious piece of tape covering something on his baseball mitten and, when he lifts it, discovers it belonged to his mom, Mary (Amy Morton).  She happened to be a baseball player when she was young, which explained her mighty arm.  She tells him to “flow” the ball; that is, to jolt it onto the air.  So he does, and it becomes a strike.  The Chicago Cubs win the game and the World Series.

Later, Henry is seen catching a short-to-be-homerun hit at a little leagues’ game; he was finally able to be a good ball player.  His team wins; Chet Steadman (Gary Busey) is shown, obviously, as their coach.  He is lifted to the air in victory, and he holds high his gold ring as a Champion of the World Series. 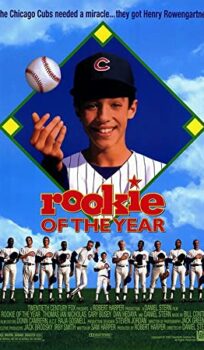