Set six years following the events of True Grit, U.S. Marshal Reuben J. “Rooster” Cogburn (John Wayne) is forced into retirement by a judge who is tired of the brazen tactics he uses to apprehend or kill his suspects.  But a short time later, that same judge goes to Rooster and offers his old job back if he can capture the notorious bank robber Hawk (Richard Jordan) and his gang.  Earlier, Hawk ambushed a squad of U.S. Cavalry and stole their wagon of dynamite, and he plans to use it to rob a bank.  Rooster tracks Hawk to Fort Ruby, an Indian village run by an elderly preacher and his daughter Eula Goodnight (Katherine Hepburn).  The night before, Hawk and his men pillaged the village, killing the preacher and most of the Indians.  As Rooster is about to leave Fort Ruby to continue tracking Hawk, Eula and one of the Indian boys Wolf decide to come along.  Rooster is against this, but they refuse to take no for an answer.

Throughout the movie, Rooster, Eula, and Wolf track Hawk and his men through the mountains, eventually capturing the wagon of dynamite.  Eula also constantly berates Rooster for his continuous drinking and general attitude, but it’s obvious that she likes him.  Eventually, Rooster softens and begins to care for Eula and Wolf, who he begins to treat like a son.  Later, the trio is forced to transport the dynamite downriver on a raft.  Numerous efforts to stop the raft are unsuccessful, and they even successfully navigate a series of rapids.  Finally, Hawk and his men try to stop the raft once and for all by standing in the middle of the river.  Rooster stops the raft and sends down several boxes of dynamite ahead of them.  When he restarts the raft, he hides and Eula tells Hawk that Rooster was injured in the rapids and they can have the dynamite if they can get safe passage down the river.  When Hawk refuses, Rooster stands up and shoots the dynamite in the water.  The resulting explosions kill Hawk and all of his men.

A short time later, Rooster is standing in the courtroom where the judge tells Rooster he was to capture Hawk, not kill him.  Eula makes an impassioned plea to the judge that Rooster was following the law and only killed them to save her life and Wolf’s.  The judge, impressed by her speech, reinstates Rooster.  The movie ends with Eula and Wolf returning to Fort Ruby with a new group of settlers and they plan to rebuild the village. 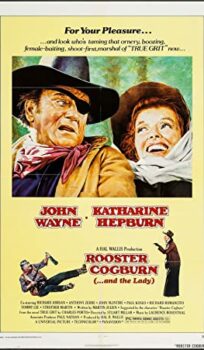