Mike McDermott (Matt Damon) is a law student and gambler who dreams of one day playing in the World Series of Poker.  After losing his entire $30,000 bankroll to Teddy KGB (John Malkovich) in a game of No Limit Hold-em, he gives up gambling to concentrate on his studies.  He also promises his girlfriend Jo (Gretchen Mol) he will never gamble again.  Several months later, his friend Lester “Worm” Murphy (Edward Norton) is released from prison, and immediately wants back into the action.  They go to Mike’s old poker room and, unable to resist the urge to play, Mike joins Worm at a table and they win some money.  Mike leaves, but when Jo finds his money, she suspects that he is gambling again.  Worm keeps playing and quickly falls into debt with the poker room.

Meanwhile, Grama, a collections agent, upon hearing that Worm is out of prison, goes around and buys up all of Worm’s outstanding debts, which comes out to $15,000.  Grama tells Worm that he has one week to come up with the money, or else.  Mike makes the mistake of telling Grama that he will get him the money if Worm cannot, so both of them are now under pressure to come up with the money.  Mike and Worm spend the next few days going from game to game trying to come up with the money, but they are not winning quickly enough.  While this is going on, Mike’s studies begin to suffer.  Now convinced he is gambling again, Jo breaks up with Mike.

On the day before the deadline, Worm is caught cheating during a game, and the other players quickly figure out that Mike is in on it.  They are beaten up, and the other players take all of their money, including what they had won earlier in the week.  Now broke, Worm decides to run away and hide from Grama.  Mike goes to Grama and gets a one day extension.  Mike then goes to his college professor and asks for a loan.  The professor, who considers Mike is best student, reluctantly gives him $10,000.  With that money, Mike goes to Teddy KGB and wants to play him for the rest of the money.  Teddy agrees, but only if Mike puts up the entire $10,000.

Playing heads-up, Mike busts Teddy and doubles his money.  Mike now has the money to pay off Grama and still have some left over, but Teddy reminds Mike that he’s still ahead by $20,000.  Incredibly, Mike returns to the table and demands that they play for the rest of his money.  By now, Grama has come to the site of the game, and demands his share once the game is over.  Since Worm is in hiding, he will take it out on Mike if he cannot pay.  Mike ultimately wins by slow rolling a 10-high straight.  Because Teddy re-bought during the game, Mike has now won $60,000.

Mike pays back all of the debts that he and Worm have accumulated ($15,000 to Grama, $10,000 to the professor, and $5000 to the poker room), and he has his original $30,000 back.  With his heart no longer on being a lawyer, Mike drops out of law school and goes to Las Vegas to play in the World Series of Poker.  He never hears from Worm again. 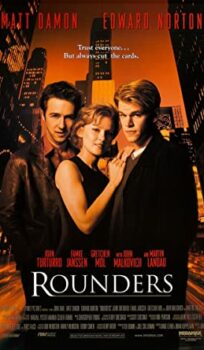