Rover (voiced by Rodney Dangerfield) saves Cal from an attack by the three wolves that were always after his chickens, finally earning his respect, and he makes the papers across the nation for his heroism. Back in Las Vegas, Rover’s dog pal Eddie catches a glimpse of one of the papers and sees Rover’s photo included with the story, so he tears out the section and gives it to Rover’s owner Connie. Elated, she calls the farm, and Cal tells her he’ll send Rover back to her. Cal’s son Danny tells Rover that he’s going to be sent home, and he is initially happy about this, but his mood dampens when he sees how sad his new love Daisy gets about it. Cal then takes him to the airport soon after.

While he’s in Connie’s dressing room celebrating his return with her and his dog pals, Rocky shows up. Rover attacks him, but Rocky kicks him away and yells to him in front of Connie that he thought he got rid of him for good. Connie, knowing now how Rover went missing, angrily slaps Rocky. Before Rocky can hit her back, Rover knocks him down, and then he and his pals chase after him until he manages to jump into a limo. Unfortunately for him, it is the limo of the two criminals he tried to do business with earlier in the film and got on their bad side. As Rocky screams, they drive off to the Hoover Dam with him, intending to kill him there.

Rover gets very depressed because he misses Daisy, but Connie eventually figures this out, so she takes him back to the farm. Rover reunites with Daisy, and Connie allows Cal & Danny to keep him. After Connie says her goodbyes to Rover, Daisy takes him into the barn, where he happily learns that he is now a father of six puppies with her. 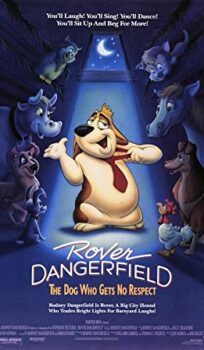