The Accountant gives the audience a poisoned turkey, which they all eat, apart from the man in the wheelchair. Sheriff Chad tells all his fellow officers that “the show’s over now,” and they no longer have to worry about the killer tire, because all the audience is dead. However, the accountant tells him that there’s still one audience member left and they have to continue the story.

The tire goes on a three day killing spree before the cops track it down to a house. They rig up a dummy with explosives and have the girl from the red car read lines into a microphone in their van, to try and fool the tire into thinking the dummy is a real person. However, the cops don’t blow the dummy up and eventually the man in the wheelchair bangs on the van, telling them to hurry up. Annoyed, Sheriff Chad goes into the house with a shotgun, shoots twice and comes out with a shredded tire which he hands to the man in the wheelchair, before driving off in the van. However, the tire has somehow been reincarnated as a tricycle that then kills the man in the wheelchair, before leaving town. The tricycle awakens many other dormant tires until a large group of them stop in LA, staring at the famous Hollywood sign. 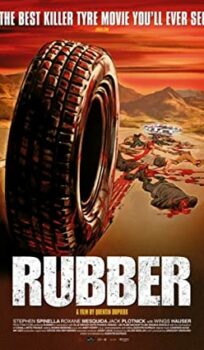