Rudy (Sean Astin) finally fulfills his dream to be part of a Notre Dame football game in the final minutes of a decisive championship game against GA Tech.  His fellow team members start chanting his name, and shortly, the entire stadium is chanting altogether in one colossal choir; this forces Coach Dan Devine (Chelcie Ross) to oblige, and let him play.

He becomes the man of the hour when he tackles a GA Tech player just as the guy is about to score a touchdown, 3 seconds away from the end of the game.  The game ends with a 24-3 scoreboard; the entire stadium cheers, emotioned; and Rudy is carried off the field in shoulders, as a hero (according to some movie info, this hasn’t happened ever again since 1975 -at least, up to the film’s release, in 1993-).

Also, it is informed that Rudy graduated from Notre Dame in 1976, and five of Rudy’s brothers went to college, obtaining degrees themselves as well. 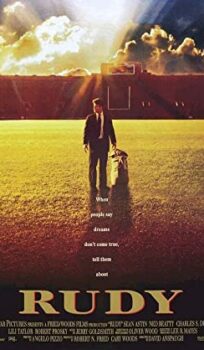