J.P. Richardson (Clark Gable) is a submarine commander who loses his command when his sub is sunk by the Japanese destroyer Akikaze during World War II. One year later, he is assigned to another sub, the USS Nerka. The sub’s executive officer, Lieutenant Jim Bledsoe (Burt Lancaster), was passed up for command of the Nerka, and is worried that Richardson might jeopardize the safety of his boat and crew. Bledsoe’s worries are realized when Richardson begins to bypass other targets in order to return to Bungo Straits, where his first sub was sunk, which is a violation of orders. There have been three other subs sunk in Bungo Straits since Richardson’s sub was sunk, and he wants to sink the destroyer that has been responsible.

On the way to the straits, Commander Richardson constantly drills the sub to fire a bow shot shortly after diving, which is considered a desperation move by a sub. The drills pay off when the Nerka sinks a Japanese destroyer with a bow shot. After arriving at Bungo Straits, Richardson attempts the maneuver again with the Akikaze, but is forced to retreat when Japanese planes suddenly appear. As they are retreating, the Akikaze drops depth charges, which damages the sub, kills several sailors, and mortally injures Richardson. With Richardson incapacitated, Lt. Bledsoe takes command and launches items from the sub, including the dead sailors, to make the Japanese think it was sunk.

While the sub is being repaired, Bledsoe and the crew realize that the Japanese knew of their arrival by finding their garbage, which was thrown overboard before they entered the straits. Now sensing that they have an advantage (they think the sub was sunk), the Nerka re-enters the Straits and sinks the Akikaze with the bow shot. When a torpedo suddenly appears, the Nerka figures out that a submarine has been working with the Akikaze. The Nerka forces the Japanese sub to surface and eventually destroys it. Commander Richardson’s revenge is complete, but he later dies due to his injuries and his buried at sea at the film’s end. 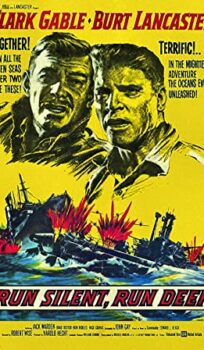