Manny (Jon Voight) is a violent criminal who has tried several escapes.  He recruits a dim-witted young convict, Buck, to help him escape again through the prison laundry.  They succeed, and make it to a rail yard, where they board a train that is leaving.  Unknown to them, the engineer had a fatal heart attack.  The engineer left the train on full throttle, with brakes applied.  The brakes burn out, so there is no way to stop the train.

The dispatcher thinks there is no one on the train, and is going to derail the train.  A young railway worker, Sara (Rebecca DeMornay) was asleep in the 2nd car.  She wakes up and realizes something is very wrong, since this train should not be speeding down the tracks.  She starts sounding the whistle, just in time to stop the dispatcher from derailing them (which would kill everyone on board).

The train is headed to a tight curve by a chemical plant.  The dispatcher knows that the speeding train can not take that curve, and will derail with a big chemical spill that could cost many lives.  He realizes that even with people on board, he must switch it to a short stub line, where it will crash.  Meanwhile, the prisoner’s clothes have been found in the rail yard.  The warden realizes they are on the train, and is determined to catch Manny himself.  The warden has the prison helicopter lower him onto the lead locomotive of the train.  Manny makes the dangerous crossing from the 2nd car to the lead locomotive.  Manny handcuffs the warden to the railing of the locomotive.  Manny uncouples the locomotive from the 2nd car, saving the lives of Buck and Sara.  Manny makes no attempt to stop the locomotive with him and the warden.  Instead, Manny climbs on the roof, and stands looking face first in the cold blowing snow to the oncoming crash. 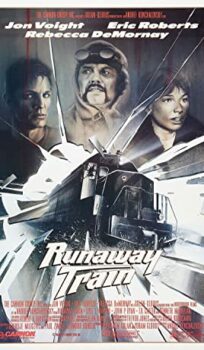