Richie Furst (Justin Timberlake) needs money for tuition.  He gambles online but finds he got cheated.  He goes to Costa Rica to confront the creator of the gambling website.  Ivan Block (Ben Affleck) gives Richie a job.  Richie invites his two friends.  They have a great time until FBI Agent Shavers (Anthony Mackie) wants them to spy on Ivan and get evidence for an arrest.  One of Richie’s friends leaves, but the other isn’t as lucky.

Richie does a bunch of jobs for Ivan, eventually finding out that Ivan is cheating more than just online players.  Richie tries to get away, but Agent Shavers catches him and says he can’t leave unless he helps the FBI catch Ivan.  Richie is in deep, and Ivan has his father, Harry Furst (John Heard), in holding after paying for his gambling debt.

Richie bribes a bunch of people who can help get him, his dad, and Rebecca Shafran (Gemma Arterton) safely away from Costa Rica, Ivan, and Agent Shavers.  Ivan and Rebecca leave Costa Rica for Antigua, leaving for Richie to take the fall.  Richie and his dad are on a plane for safe haven.  Ivan’s plane lands, but not in Antigua.  Ivan is met by Richie, who then realizes he’s been double-crossed and is on US soil.  The FBI arrest Ivan.  Richie and Rebecca leave on the plane Ivan came in on.  Richie left a USB stick for Agent Shavers to help with the arrest.

Ritchie and Rebecca fly off to somewhere. 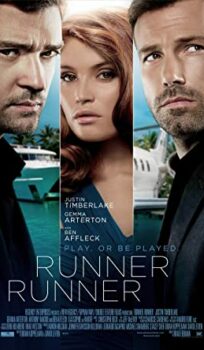