In 1971, Arthur and Annie Pope (Judd Hirsch, Christine Lahti) are anti-war activists who blow up a napalm lab, injuring a building janitor.  On the run from the FBI ever since, they and their two sons are constantly moving and taking up new identities every few months.

Their oldest son Danny (River Phoenix), now in his late teens, has enrolled in a new high school, and is taking a music class.  His piano playing skills catch the attention of his music teacher, and he suggests that he audition at Juilliard.  The teacher also begins to pry into Danny’s personal life, wondering why he doesn’t have any prior school records.  Danny has also caught the attention of the teacher’s teenage daughter Lorna (Martha Plimpton), and the two begin a relationship.

Danny passes the audition at Juilliard, but he doesn’t tell his parents about it.  He knows that if he is to go to college, he may never see his parents and younger brother again.  He also tells Lorna his family secret.  Annie finds out about the audition and, risking capture from the FBI, visits her estranged father.  He agrees to take care of Danny, if he decides to leave his parents.  Arthur also finds out about the audition, but he won’t allow Danny to leave, claiming that this could cause them to be captured.  Eventually, Arthur comes to realize that he is turning into the authority figure that he has always despised and has no right to deny is son’s dreams.

At the end, the FBI begins to close in on the Popes, and they prepare to leave town for yet another new life and identity.  However, Arthur tells Danny that he is to go live with Annie’s father in New York while attending Juilliard.  The Popes then drive off, leaving Danny behind to start his new life. 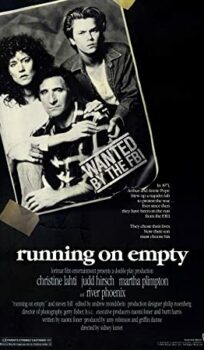