The film chronicles the rivalry of two Gran Prix race drivers: flamboyant British playboy James Hunt (Chris Hemsworth) and analytical Austrian gearhead Niki Lauda (Daniel Bruhl). The film begins with the two as young Formula III racers that are always at odds because of both their considerable driving skills and their polar opposite personalities and follows both of them as they rise to the Formula I level.

The main action of the film takes place during the 1976 Formula I Gran Prix Racing season where Hunt and Lauda duel each other for the championship. Lauda is the front runner in points when the race at the dangerous Nurburgring, Germany track is held in a driving rainstorm. Lauda urges the other drivers to vote to cancel the race because it is too dangerous. Hunt sways the argument and the race is run. On Lap 2, Lauda crashes and suffers severe burns to his face and lungs.

Hunt takes over the points lead as Lauda recuperates. Motivated by their rivalry, Lauda returns to racing in only six weeks and takes the championship lead by three points before the final race of the season, the Japanese Gran Prix.

The rain is pouring down at the start of the race, and Lauda has difficulty seeing. Thinking of his wife, Lauda retires from the race on the second lap. Overcoming a damaged left front tire with four laps to go, Hunt manages to finish third, earning four points and the 1976 Formula I Gran Prix championship.

The film ends with the pair meeting at an airport in Bologna, Italy where the two men acknowledge that the mutual competition pushed them both to achieve more than they did if the other hadn’t been around.

As a postscript, we learn that Hunt retired two years later, continued his wild lifestyle, and died of a heart attack at age 45. Lauda won the Formula I championship in 1977 and again in 1984 and is still alive and involved with Formula I Racing. 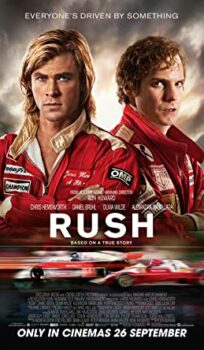