POOPER
After Colonel Ticonderoga’s men shoot Pete, Rex recruits the sheepherders and they enter the town prepared to fight the Colonels’ henchmen. The sheepherders and henchmen all shoot each other, leaving Rex and Bob. They each shoot the gun out of each other’s right hand, but Bob shoots Rex in his shoulder with his left hand. Rex, realizing Bob isn’t a good guy after all, shoots Bob in the head with his left hand, killing him. The Colonel’s apologize to Rex for their behavior and throw a party in his honor. At the party, Rex kisses both the Colonel’s daughter and Miss Tracy (with more passion) goodbye, then he and Pete ride out of town into the sunset.

LONG VERSION
The movie opens like a typical singing cowboy movie from the 1930s, with the narrator (G.W. Bailey) saying Hollywood stopped making this type of western movie a long time ago, but he wonders what it would be like if they were still being made today. The black and white movie suddenly turns into color, and the story begins. Rex O’Herlihan (Tom Berenger) is known as “The Singing Cowboy”, and he rides into the typical western town of Oakwood Estates on his trick horse Wildfire. He enters the saloon, where he meets Pete, the town drunk (Bailey), who reveals himself to be the narrator. Pete introduces Rex to the townspeople, including the friendly sheepherders, Miss Tracy (Marilu Henner), the prostitute with the heart of gold, and the corrupt sheriff who takes his orders from the Colonel, who runs Oakwood Estates. Three of the Colonel’s men then enter the saloon, and their leader, Blackie, promptly kills one of the sheepherders, who are in a dispute with the Colonel. Rex then shoots Blackie in the hand, knocking away his gun. The two others shoot at Rex, but accidentally shoot Blackie in the back, killing him. They return his body to the Colonel’s ranch, where we meet the owner, Colonel Ticonderoga (Andy Griffith). He is told that Rex shot Blackie in the back, so the Colonel orders his men to kill him. The Colonel’s daughter (Sela Ward), who was in love with Blackie, then decides to ride her horse Wildfire to clear her head, but she falls off and is dragged behind it.

Rex, now at his campsite outside of town, has just sung a song and is cleaning his outfit and going through his armoire picking out his outfit for tomorrow when the Colonel’s daughter, still being dragged behind her horse, goes by (her actual name is never revealed). Rex rescues her and she instantly falls for him, and is even amazed that both of their horses have the same name. She wants to have sex with him, but Rex declines. He then hears someone approaching and has the daughter hide. Miss Tracy appears, and she also fell for Rex while in the saloon, but he isn’t interested in having sex with her either. Another person approaches, and he has Tracy hide. Pete shows up, and he wants to be Rex’s sidekick, but Rex doesn’t want one because he knows what will happen. He tells Pete that every time he travels to a new town, everything is the same. The bad guys run the town, and it’s up to him to stop them. The women fall for him, but he never does anything more than kiss and sing to them, and his sidekick always dies. Pete doesn’t care and he eventually trades in his drunken clothes for those typically worn by a sidekick. Realizing they won’t be having sex with Rex, both the daughter and Tracy leave the campsite. Later, Rex and Pete are ambushed by the Colonel’s men, but Rex defeats them all by shooting their guns out of each of their hands.

Thinking he can’t beat Rex, Colonel Ticonderoga approaches the Railroad Colonel (Fernando Rey), and he recruits the Colonel (his actual name is also never revealed) and his men to help kill Rex. These men are always dressed in dusters, even though the temperature is over 100 degrees. Pete, as the narrator, says that Hollywood replaced the singing cowboy movies with spaghetti westerns, and he figured that this type of cowboy would appear in a modern day western, so here they are. Again they try to ambush Rex and Pete, but Rex is able to outsmart them and they get away. Rex later tells Pete that the bad guys always do the same thing in every town, so he knows ahead of time what they will do. He also knows what’s coming next, so he goes to the sheepherders to help in the climactic battle. However, they refuse to get involved, saying that Rex started this fight and he must finish it himself. Colonel Ticonderoga also knows that Rex will win because he knows what they, the bad guys, will do next, so they need to come up with something that Rex has never seen before. The Colonels’ plan is to recruit “Wrangler” Bob Barber (Patrick Wayne), another good guy singing cowboy, to their side. When Rex arrives at the saloon for the expected climactic battle, he is surprised to see Bob. Rex’s tricks to outsmart and disarm his opponent don’t work on Bob, because he already knows them and can counter them with his own tricks, which include questioning Rex’s confidence in his heterosexuality. Rex backs down from the battle and rides out of town, and the townspeople call him a coward as he leaves Oakwood Estates.

Bob returns to the ranch, and tells the Colonels that Rex is finished as a good guy. However, Colonel Ticonderoga still wants Rex killed. Bob won’t do it because that’s against his personal code, so the Colonel sends his men to Rex’s campsite. At the campsite, Rex is in the process of throwing away his outfits when Pete arrives to talk him out of it. Rex won’t listen to him, and tells him to go away, but he also tells him something else. Rex leaves, and Pete is cleaning up the outfits when the henchmen arrive and shoot Pete. Rex, now angry for what was done to Pete, goes back to the campsite, puts on an outfit, and goes to the sheepherders. This time, he demands that they help with the climactic battle, or he will shoot their matriarch in the shoulder. Several sheepherders then show up with rifles, and together they ride into Oakwood Estates, where they meet both Colonels, their henchmen, and Bob, wearing his own western outfit. Gunfire quickly erupts, and soon all of the sheepherders and henchmen are lying dead in the street. A sniper in an upstairs window then takes aim at Rex, but he is shot from another window. It’s Pete, who reveals that Rex told him to start wearing a bulletproof vest. That just leaves the Colonels and Bob on one side and Rex and Pete on the other. Rex and Bob tell the others to get out of the way and let them finish this. Rex counts down from 5 to 1, then they both draw their guns at the same time and shoot them out of each other’s right hand. They then draw their other guns with their left hand, but Bob is quicker and shoots Rex in his shoulder. Rex realizes that Bob isn’t a good guy after all since that violates their code. After Bob confirms that by saying he’s actually a lawyer, Rex shoots Bob in the head, killing him instantly. Rex then tells Pete that because of his wounded shoulder, his shot missed Bob’s hand.

Knowing they have lost, the Colonels approach Rex and apologize to him for their actions and decide to throw a party in his honor. At the party, narrator Pete mentions that the sheepherders and henchmen who were thought to be dead are there, with no signs they were ever wounded, which apparently happened a lot in these movies. Rex, wearing a sling on his arm, calls everyone over and tells them it’s time for him to leave. Pete wants to go with, but Rex says that Oakwood Estates is his town and he belongs there. Rex then kisses the Colonel’s daughter, then Miss Tracy (with more passion) goodbye, then goes to mount his horse. Rex tells Pete that while he was away from the campsite the night he was shot, he and Tracy had sex, which built up his confidence to fight Bob. The movie ends with Rex riding out of town into the sunset, and Pete, who ignored Rex’s order to stay, follows him into the sunset. 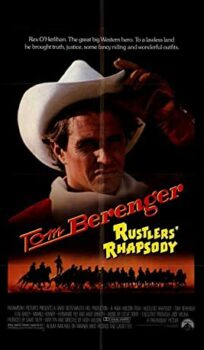