Young Rosie Ryan (Sarah Miles), the daughter of local pub owner Tom Ryan (Leo McKern), feels stifled and suffocated in her small, secluded, coastal Irish town. The only educated person in town is  the  schoolmaster  Charles Shaughnessy (Robert Mitchum). When Shaughnessy was Rosie’s teacher, he introduced her to literature and poetry, which greatly expanded her dreams and horizons. She imagines that she is in love with him, and marries him, even though he is an introvert who is old enough to be her father. Over time, she learns that the passive, older Shaughnessy cannot satisfy her emotional or sexual needs.

The British Army sends Major Doryan to the village, to maintain law and order. Doryan was severely wounded in action during World War 1, and is suffering from severe shell shock and trauma due to his combat experiences.  Rosie finds herself attracted to him, and begins a passionate affair with him. Almost everyone in the town knows what she is doing, and regards her as both a harlot and a traitor to Ireland.

Tim O’Leary, the leader of a band of Irish rebels, comes to town and meets with Tom Ryan. He tells Ryan that a boatload of explosives will soon be delivered to the local beach. Ryan pretends to be an Irish patriot, but later calls the British Army and tells them about the delivery. When O’Leary comes to the beach to pick up the explosives, Major Doryan and his soldiers are waiting for him. When O’Leary tries to run away, Doryan shoots him, then has him arrested.

Shaughnessy has figured out that Rosie is having an affair with Doryan, and while he’s deeply saddened, he does not hate Rosie. He always suspected that he was a poor match for her, and is willing to let her leave him, with no hard feelings.

Everyone in the village assumes that Rosie betrayed O’Leary to her lover, Major Doryan. The townspeople form a vengeful mob. They capture Rosie, beat her, strip her, and shave off her hair, When Charles Shaughnessy tries to rescue her, the townspeople beat him up, too. Finally, the local Catholic priest  (Trevor Howard) steps in and puts a stop to the violence. The cowardly Tom Ryan stays back and does absolutely nothing to help his daughter, who is being punished for his crimes.

The next morning, Michael the village idiot (John Mills finds a stash of explosives that  the British soldiers had not recovered earlier. He leads Major Doryan to the boat. The miserable, traumatized Doryan uses the explosives to kill himself.

Shaughnessy and Rosie head to the bus depot, intending to leave the town forever. Shaughnessy plans to divorce Rosie, but bears her no ill will, and is prepared to be generous to her and help her get on her feet as a single woman in Dublin. The priest wishes them well, but before they leave, he implores them to consider saving their marriage. 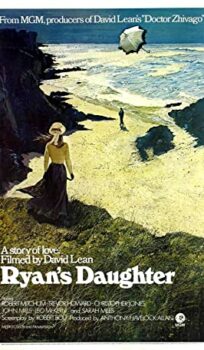