Cliff Spab (Stephen Dorff) and his friend Joe are taken hostage at a convenience store along with 3 others by a terrorist group called Split Image. Their only demand is that their unedited footage of the hostages is aired on all the major television networks. When the networks refuse to air the videos, the terrorists kill 2 of the hostages. Now with the videos airing every night, Cliff, Joe, and the third surviving hostage Wendy (Reese Witherspoon) become media icons. All this time, Cliff becomes indifferent to being killed, and repeatedly tells the camera, “So fucking what”. The standoff lasts for 36 days, until the hostages get a hold of the terrorists’ guns and fight back. Cliff and Joe kill all of the terrorists, but Cliff is wounded and Joe is killed.

Several days later, Cliff is released from the hospital, only to be met by hordes of reporters and admirers chanting his “so fucking what” mantra. He also sees his line, abbreviated to “S.F.W.”, plastered on t-shirts, billboards, and everything else that he sees. It turns out his mantra struck a chord with a lot of people who share his attitude towards life but never had the guts to say it. At first, Cliff tries to run away from it all, trying to go back to his old life. When he realizes that he can’t go back to his life before the convenience store, he decides to embrace his new-found celebrity status by holding press conferences and autograph signings while acting like the rebel everyone thinks he is.

Cliff’s real desire, however, is to get back together with Wendy. He eventually tracks her down, and they soon develop a romantic relationship, which is hampered by the ever-present media and paparazzi. When they sneak away to revisit the now-closed convenience store, Cliff tells Wendy that he wishes the constant attention would just go away so that they could start a life together. Wendy admits that this is also what she wants. Some time later, Cliff and Wendy are speaking to a group of high school students. One of them pulls out a gun, yells “Everything matters!”, and opens fire, wounding both Cliff and Wendy. The student, Babs Wyler, immediately gets the attention of the media, and her line replaces “S.F.W.” as the national catchphrase. Cliff and Wendy, both recovering in the same hospital room, are relieved that the media has forgotten about them and they can now start their lives together in peace. 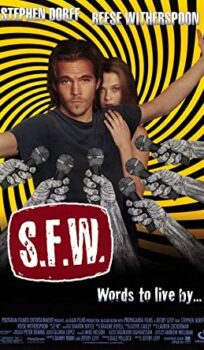