Matt Colter is a hunter and trapper in the old west.

He marries Little Doe, a native american, and they rebuild an old cabin.  They don’t know that the cabin sits in a sacred Paiute burial ground.  A Paiute burial party attacks them and kills Little Doe.  Colter kidnaps a native woman, as a wet-nurse until he gets back to civilization.

The Paiute pursue them to rescue her.  The chief just lost his son, and wants to keep the baby.  Colter holds them off with his rifle.  At night, a Paiute sneaks into camp and attacks Colter.  Colter is knocked out, but they think he is dead.  They take the woman and baby back to the village.  The chief is angry, as he does not think she tried to escape from Colter.  She is banished from the tribe.  She follows Colter’s tracks, hoping to take up with him.

Colter returns to the sacred burial ground.  He threatens to desecrate the graves by burning them, if they don’t return his son.  The chief dresses as a woman, pretending to return the baby.  He attacks Colter, and they capture Colter.  They are about to cut his throat, when the banished wet-nurse shows up.  She grabs a torch and stands behind the pile of firewood.  If they don’t free Colter and the baby, she will light the fire, desecrating their dead.  The chief decides to free Colter and the baby.  The Paiute ride off.  Colter and the native woman ride the other way together. 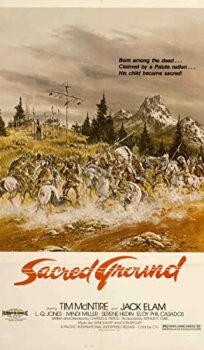