Pooper:
It turns out the Amsterdam government has known about Saint Niklas’ killing sprees for years and has been covering it up (including covering up this recent attack too). They pay off Frank to keep the truth about Niklas quiet. With his ship destroyed, Niklas is now stranded in the city and is last seen looking out angrily at the people of Amsterdam from a clock tower.

Long Ending:
This movie is not based on Christmas but on the somewhat similar Dutch celebration of Sinterklaas held on December 5th. On this holiday, Saint Niklas sails to the Netherlands from Spain and rides a horse on the rooftops of the towns. His servant, Black Pete, goes down the chimney to deliver presents and oranges. In some versions of the tradition, Black Pete will spank bad children or even kidnap them back to Spain so they can learn to be good children under Saint Niklas’ guidance.

The film opens in the 400s where a corrupt bishop named Niklas (Huub Stapel) leads a vicious gang (the Black Petes) in killing and plundering villages throughout Denmark. One town finally fights back and burns the ship that Niklas and the Petes sail on – killing everyone aboard. However, Niklas and the Petes return as murderous zombies who return when there is a full moon on December 5th. Niklas rides a horse over the rooftops, and his Petes drop down chimneys to kill the families they find inside. Niklas and his zombie gang return to Amsterdam every few decades when a full moon rises on December 5th.

In the present day, Niklas’ origins have been forgotten. He is instead revered as a saint who brings presents and treats to those in Amsterdam during a celebration on December 5th called Sinterklaas. As it is a full moon, Niklas and his murderous Black Petes sail into town. Meanwhile, college student Frank (Egbert Jan Weeber) has just been dumped by his girlfriend Sophie (Escha Tanihatu) after he cheated on her with her now-regretful friend Lisa (Caro Lenssen). He also has a tough home life as his mother is paralyzed. Frank goes out with some friends to a St. Niklas party when they are attacked by Niklas and the Petes. His friends are slaughtered, and Frank barely escapes. The police arrest Frank, believing he killed his friends. Things grow even more grim from Frank when police find Sophie murdered (also by Niklas) and suspect that Frank is a serial killer. Nobody believes his claims that the killer is Niklas, who they believe is imaginary.

While being transported to prison, the police see Niklas riding his horse over the rooftops and pursue him. The police are eventually killed as bullets do not kill Niklas or his gang. Frank is only saved when a cop named Goert (Bert Luppes) arrives and scares Niklas off with a flamethrower (but not before being Niklas stabs Goert with his razor-sharp crosier). As a child, Goert witnessed Niklas and the Black Petes slaughter his entire family during Niklas’ last killing spree and has been waiting to stop Niklas ever since. Goert explains that due to how Niklas was killed as a mortal, he can be hurt by fire. Thus, Goert intends to find Niklas’ ship and destroy it with illegal explosives he bought. Frank agrees to join Goert in his mission to stop Niklas.

The pair find Niklas’ ship and wait for the saint and his servants to return so they can blow it up. However, the police arrive and arrest Goert and Frank. The activity alerts Niklas and he and some of his Petes leave their ship and slaughter the police. Goert also dies after bleeding out from his earlier wound. Niklas approaches Frank to kill him, but Frank manages to launch the explosives into Niklas’ ship and blow it up. A terrified Niklas retreats into the darkness.

Frank is taken to a hospital where a government agent reveals that they’ve long been aware of Niklas’ killing sprees. However, they have chosen to keep the truth secret as the people would never accept these supernatural events. The government covers up the killing spree by blaming the various murders on Goert or having been accidental. The government then gives a large check to Frank, casts him as a hero who stopped Goert, and also promises to get his mother medical treatment if he plays along with their ruse. Frank agrees and then is visited by Lisa who, thinking Frank is a big hero, gives him passionate sex. Meanwhile, Niklas looks down angrily upon the city from a big clock tower (unable to leave Amsterdam due to his boat being destroyed). 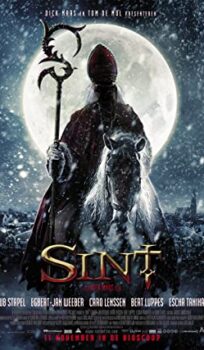