Maud (Morfydd Clark) is a former nurse who lost a patient on the job. She turns to God and tries to practice her faith for salvation. She takes up a job as a caretaker for a woman named Amanda Kohl, a former dancer who is suffering from stage 4 lymphoma. Maud attempts to get Amanda to open up to God and find her faith, but Amanda is an atheist and only plays along for Maud’s sake.

Maud sees that Amanda has a female lover named Carol, and although she tries to get rid of Carol, she refuses to go. This culminates in an incident at Amanda’s birthday party where Maud smacks her after Amanda mocks God and her faith. Maud is fired and goes out on her own one night to find a companion. She has sex with a man who recognized her as Katie from her days as a party girl.

Maud encounters a cloud formation that speaks to her in a demonic foreign voice and appears to present her with a task. Maud later goes back to Amanda’s house to try to bring her salvation again, only for Amanda to take a demonic form (which is more than likely just Maud hallucinating) and tell her God isn’t real. Maud flips out and stabs Amanda to death.

The next day, Maud goes to a beach where she prepares to light herself on fire. The last image in her head is of her taking an angelic form while the crowd bows before her, only for the reality to be that she is burning and screaming in agony. 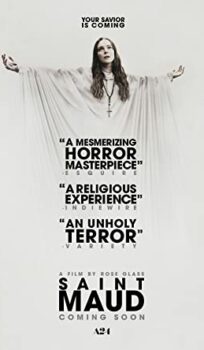