CIA Agent Evelyn Salt (Angelina Jolie) is actually a Russian spy, having been recruited as a child.

Her cover is blown on what is the start of Day X where two events are planned. The first is the killing of the Russian President who is in NY for the funeral of the American Vice President. The result which will look like the CIA did it and it appears that Salt successfully completed this part. The second is the stealing of the US Atomic weapon controls from the U.S. President and launching an attack on two Islamic cities.

Just as they are about to launch the nuclear attack she discovers that her CIA partner, Ted Winter (Liev Schreiber) is also a mole for the Russians and she stops him from launching the nukes but she is shot in the process. Ted (whose cover wasn’t blown) is the hero. She isn’t dead however and as she is being led away she kills Ted in an very stylistic maneuver.

While being flown away she convinces the head CIA agent that she is actually the one who just saved the world but there are many more moles out there. He says that he believes her but nobody else will so he unlocks her handcuffs and tells he to “Go get ’em” as she jumps out of the copter, into the river.

The film ends as she is running through the woods. 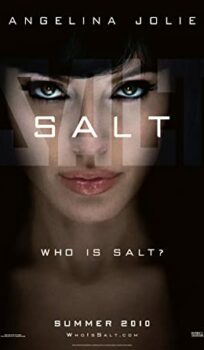