Frank McGuire (Richard Roxburgh) is leading an expedition of the Esa-Ala cave system in Papua New Guinea.  In addition to exploring the caves, Frank and his team are looking for a long-rumored exit from the caves to the Pacific Ocean.  One of the members of the team is Frank’s son Josh, with whom he has a strained relationship.  The expedition’s bank-roller, Carl (Ioan Gruffuld) and his girlfriend Victoria, join the expedition just as a storm approaches.  The storm turns into a cyclone, and the rainwater begins to flood the caves.  After the flood causes the collapse of the cave’s only exit, and knowing that climbing out through the top of the cave is not possible, the five surviving team members realize the only way to escape is to go further into the cave and find the exit to the ocean through an underground river.  Those five surviving team members are Frank, Josh, Carl, Victoria, and Frank’s long-time diving partner George.

As the team travels further into the caves, they come across tight spaces, air pockets, and other dangerous areas of the cave.  George rises too quickly into an air pocket, suffers “the bends” as a result, and later dies.  While crossing over a flooded cavern, Victoria (who has no diving experience) falls in and drowns.  A distraught Carl blames Frank for her death because he is always pushing everyone.  Earlier, before the flood, another team member had an accident and drowned, and some felt Frank was responsible for her death as well.  When Victoria fell in, they also lost two of their three remaining air tanks.  With only one tank left for the three remaining survivors, Carl takes it and goes back into the river.  Frank and Josh, realizing that Carl isn’t going to return for them, take a non-watery path.  They eventually find another entrance to the cave high above them, but without their climbing gear, they can’t reach it.  They also find the remains of a WWII era tank that had fallen into the cave.

After finding the underground river again, Frank and Josh come across Carl.  Carl found Victoria’s body, and seeing Frank again made him lose it and try to kill him.  During their fight, Carl impales Frank on a rock.  Josh throws a torch at Carl that was made from oil from the tank, burning him.  Carl then dives into the river and swims away.  Josh goes to his father, and Frank tells him that he cannot continue on and won’t survive much longer.  After an emotional goodbye, Josh puts Frank out of his misery by drowning him.  Josh then takes the only air that remains from a small reserve tank and dives into the river.  Along the way, he finds Carl, who had drowned when he ran out of air.  Just as Josh’s air runs out, he sees daylight.  He swims to it and emerges in the ocean.  The movie ends with Josh, the only survivor of the expedition, crawling onto the beach as natives run to him. 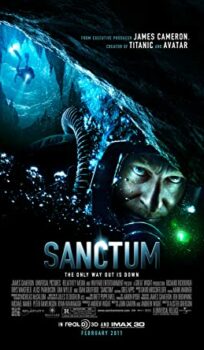