Zushio and Anju are separated from their mother and sold into slavery, while the mother is driven to prostitution. Zushio and Anju plan an escape and Anju drowns herself in a lake in order for her brother to escape to freedom.

Many years later Zushio is walking along a beach and he sees an old blind woman near a hut. Suddenly he recognizes her voice as she is calling out the names of her children Anju and Zushio. Zushio is finally reunited with his mother.

Don P. adds…
Zushio, who was the son of an aristocrat, regains his identity, is appointed to a Governor position, and outlaws slavery. 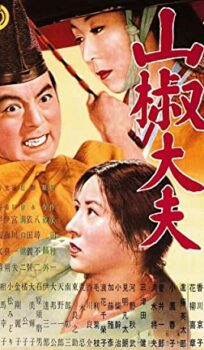