B.Z.’s (John Lithgow) plan to take over Christmas with Patch’s (Dudley Moore) flight-inducing candy canes is undone when it turns out the canes (due to the stardust in them) explode at high temperatures. He intends to hide this from Patch and flee the country with the profits from the candy, but Cornelia overhears this. Meanwhile the imprisoned Joe is discovered and freed by Patch – who learns inadvertently that Santa still cares for him when he sees the carving the big guy made for Joe, modeled on Patch’s likeness.

Cornelia alerts the police to B.Z.’s scheme and the villain tries to use the candy canes to escape – he eats too many and flies into space. Santa, with Cornelia, uses his sleigh to pursue Patch and Joe, who are headed to the North Pole in the former’s flying car with the candy canes (not knowing of the danger); the car explodes but Patch and Joe land safely in the sleigh when the reindeer finally pull off the Super Dooper Looper. The good guys celebrate the reunion together at the Pole. 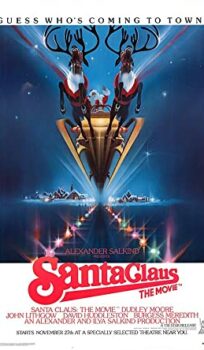