POOPER:
Adam blows up Hector the robot, killing himself in the process. Alex leaves the base and makes her first-ever trip to Earth.

LONG VERSION:
Set in the distant future, Earth is overcrowded and scientists from all over the solar system are trying to come up with ways to grow food on other planets and moons to help support life on Earth. The only way to keep in contact with these distant worlds is through spaceships shuttling people and supplies to and from the bases. On one of these bases, Captain James is preparing to depart when he is killed by Captain Benson (Harvey Keitel), who was recently rated as “potentially unstable” on his mental exam. He steals Captain James’ cargo ship and heads for a small hydroponics lab on the third moon of Saturn, a.k.a. Saturn 3. The lab is the home for two lonely scientists: Adam (Kirk Douglas) and Alex (Farrah Fawcett). Despite the 30-year age difference, the two are in love and they, along with their dog Sally, are the only living beings on Saturn 3. They have lived and worked in their lab for about 3 years, but Alex has lived her entire life in space and has never set foot on Earth.

Benson arrives on Saturn 3, and he tells Adam and Alex that he is there to replace one of them with a robot named Hector. Hector is equipped with human brain tissue and is programmed via a direct link to Benson’s brain. Whatever Benson thinks and feels, Hector will think and feel the same way. Hector soon is imprinted with the murderous impulses Benson has due to his murder of Captain James, as well as lustful feelings for Alex that Benson began showing upon arriving. Hector soon rebels against the humans, first by killing Sally the dog, then attempting to do the same to Alex. Benson is able to disable the robot, and is then told by Adam to disassemble the robot and leave Saturn 3 as soon as possible. Because the moon is behind Saturn, the lab is in an eclipse, which means it’s out of contact with other bases and no one can leave for about a month.

Despite being deactivated, Hector is able to communicate with the other machines in the lab, and they assist in reassembling Hector. Meanwhile, Benson becomes more unstable and attempts to leave the base early, and he is forcing Alex to come along. Suddenly, a reactivated Hector appears, and it kills Benson, allowing Alex to escape. She and Adam quickly decide to flee the base on Benson’s ship, but Hector triggers the ship’s self-destruct, and the scientists are now trapped in their lab. Later, Benson appears on the control room’s monitors, and he tells Adam and Alex to meet up with him. Surprised that he is still alive, they do so, only to find that Hector is now wearing Benson’s severed head as a hat, and it can now mimic their voices. This becomes important after the eclipse ends, when another ship approaches and Hector, with Adam’s voice, tells them everything is fine and they don’t need to land.

One morning, Adam wakes up in his room and discovers that Hector has installed a direct input into his head, similar to what Benson had. If he tries to remove it, it will kill him instantly. Hector summons Adam and Alex into the lab, where he will connect with Adam to learn all that he knows. But before it can do that, Adam kisses Alex, then grabs a grenade and tackles Hector. Both of them fall into a pool and the grenade explodes. The blast destroys Hector, but it also kills Adam. The movie ends some time later, with Alex now on a large transport ship. She looks out the window and sees, for the first time, Planet Earth. 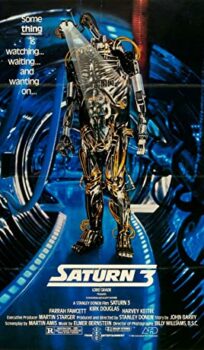