Ben (Sam Bottoms) is hired to lead a hunter out into the desert.

The hunter, Horton Madec (Andy Griffith), shoots wildly at movement in the rocks, killing an old prospector.  Madec is a rich lawyer and thinks this will ruin him.  He decides to eliminate the only witness.  Since people know Ben is with him, Madec can’t just shoot him.  Madec takes Ben’s shoes, shirt, hat, and all the water.  He forces Ben to hike at gunpoint in the heat so that Ben will die of heatstroke and dehydration.

Ben manages to hide and then overpower Madec.  Ben takes Madec prisoner and brings Madec and the dead body back to town.

When they get to town, Madec claims Ben committed the murder.  Using his legal training, Madec hides evidence and convinces the police Ben committed murder.  Madec is heading to the airport home when Ben realizes the hidden evidence must be at the gas station they stopped at when they returned from the desert.  Ben finds it with the police, so the police now believe Ben over Madec. 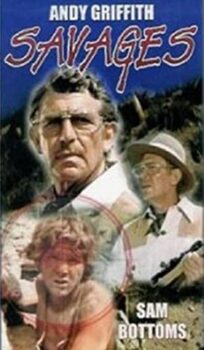