Tony (Paul Muni) shoots his best friend Guino (George Raft) after he discovers him with his sister Cesca (Ann Dvorak), not realizing that they had just married. When the police try to arrest Tony for murder, he holes up in his apartment and prepares to shoot it out. Cesca sneaks in to kill Tony but can’t do it because she realizes they are exactly alike. Cesca is shot by the police and dies saying how much she loved Guino. Left totally alone for the first time with the two people he loved most dead, Tony loses his nerve. He tries to make a break for it and is shot down by the police under the “The World is Yours” sign.

Alternate ending:
The censors in some cities demanded this ending since they considered the original to be improper.

After Cesca dies, Tony is arrested, tried, convicted and sentenced. He is hung in the final shot.

The ending was never used since the censors refused to approve the film even with cuts and the new ending. The film was restored to its original version but the alternate ending was preserved. 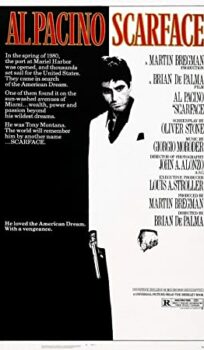