Submitted by James F. for the Pooper and Evan for the "Order of Death"

Regular Short:
Jill (Emma Roberts), Sidney’s (Neve Campbell) cousin, and Charlie (Rory Culkin), one of the biggest movie geeks in school, are the killers. They recorded all of the murders with the plan of framing Sidney and Jill’s ex-boyfriend Trevor (Nico Tortorella) for the crime. But Jill turns on Charlie, killing him, explaining to Sidney that her real motivation is to gain the same sort of fame that Sidney did after the events of the previous films. She stabs Sidney and stages a crime scene. Jill is taken to the hospital, where Dewey (David Arquette) informs her that Sidney survived her wounds. Panicked, Jill goes to Sidney’s room and attempts to murder her. Meanwhile, Dewey and his wife Gale (Courtney Cox) have figured out that Jill is the murderer, and they all wind up in a confrontation. In the end, Sidney shocks Jill with a defibrillator, then shoots and kills her. Outside the hospital, a group of reporters mistakenly report that Jill is a hero. 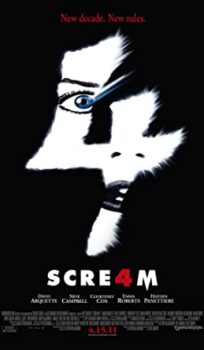