Sam reveals to Tara that she fled because she found out that she is the illegitimate daughter of Billy Loomis, the original mastermind killer from the first Woodsboro murders that spawned the “Stab” slasher franchise, and Sam worried she would end up like her father. She and Richie seek help from Dewey Riley (David Arquette), who has since been retired from the police force and split up from Gale Weathers (Courteney Cox).

Ghostface kills a guy named Vince, who was the nephew of Stu Macher, Billy’s old accomplice. He also attacks Sam and later kills Sheriff Judy Hicks and her son Wes. After an attack at the hospital, Ghostface murders Dewey, which prompts Sidney Prescott (Neve Campbell) to return to Woodsboro to avenge her friend. Although she tries to help Sam, she instead plans to flee town with Tara and Richie.

The climax happens at a house party taking place in Stu’s old home where the climax of the first movie happened since this is where Tara’s friend Amber lives and she needs to get an inhaler from her. Sidney and Gale follow them thereafter putting a tracker in Sam’s car. Siblings Chad and Mindy (nephew and niece of Randy Meeks) are stabbed by the killer, while Chad’s girlfriend Liv is shot in the head. The killers are Amber and Richie, as they are two psychotic fans of the “Stab” franchise who were so upset by the last movie that took too many liberties that deviated from the original film, that they decided to make their own story by involving old characters with new ones that have a connection to the older characters. After Tara gets free, she attacks Amber while Sam fights Richie. Sidney and Gale shoot Amber and set her on fire while Sam stabs Richie and slashes his throat. Amber is still alive until Tara shoots her in the head, while Sam shoots Richie in the head to make sure he is dead.

Sam thanks Sidney and Gale for their help before going to the hospital with Tara. Gale then says her next book will be about Dewey and how he was a hero. 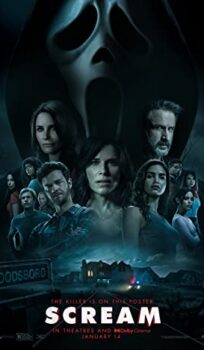