Commander Sexton (Greg Byrk) attempts to escape the bunker after finding out Orsow (Lance Herikensen) lied about having fuel cells. Orsow knows that Sexton is trying to get the Screamers data back to Earth and considering them a plague would rather them all die that that information find its way there. Sexton kills Orsow but Orsow is able to destroy his TAB sensor, making him vulnerable to being killed by a Screamer.

Only Bronte (Gina Holden) and Guy (Stephen Amell) get back to the ship with the fuel cells. After being confronted by a reanimated Madden and killing him, they take off just before the planet destroying storm hits.

Two months later Guy and Bronte wake up from cryo sleep. Bronte is pregnant though her pregnancy is quicker than normal, but Guy says they will handle it together, “For he’s our first and they won’t be anyone like him. Ever.” Bronte realizes in horror that Guy is a half machine/half human screamer and is physically restrained by Guy as they return to Earth, implying the beginning of the end of human civilization.

Also: Bronte is the daughter of previous protagonist Joe Hendricksson (Peter Weller). His ship was burned up during reentry to Earth and was labeled a suicide. But Orsow tells Bronte her father would only of sacrificed himself because there were Screamers on the ship and he didn’t want them to get onto Earth and cause untold havoc. 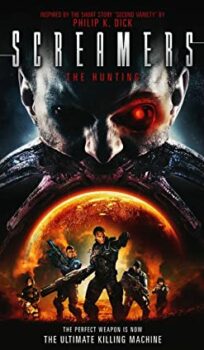