Short version:
William (Norm MacDonald) and Rusty (Dave Chappelle) are cleared of all charges once them, along with Grover (Danny DeVito) and Miss Crock (Elaine Stritch), find out that Chip stole all the ransom money. William finds out that his father never said “work with Miss Crock and you’ll get ahead”, he said “work with Miss Crock and you’ll get head”… because his father was a male prostitute, which he never knew. In the end, Miss Crock ends up marrying Grover, and pays for William and Rusty to move to Bali and open up a chicken wing restaurant.

Long Version:
William Fillmore works for Miss Crock, a multi-millionaire CEO of a mass-produced pie company. She’s very rude and thinks extremely poorly of William. He finally cracks when on Christmas Eve, when she gives her friends 50,000$ cash as a present, and only gives him a small pie after working for her for 10 years. He overhears her talking later about planning on firing him on Christmas day.

William makes a plan with Rusty Hayes to kidnap her beloved dog Muffin, and hold him for ransom. They break into the house and steal the dog, then leave behind a note that says “We have him. Give us one million dollars or he is a dead dog”. They put the dog in a box then put the box in the back of their van, but while they are driving away the dog escapes and flees back home.

Miss Crock wakes up to find William missing, and the note. Since her dog returned home, she assumes the note is about WIlliam. William and Rusty find out about this, and decide to go along with it, and pretend that William was the one kidnapped. They film a fake video of William being chained up in a cage begging for help and e-mail it to CNN, who airs it on TV. Since Miss Crock had originally refused to pay the ransom, this causes protests against her company, which drops her pie sales and stocks.

Meanwhile, Rusty and William plan to make a fake body to plant after the ransom is picked up, making it look like he died so he is free to escape with the money. They hire Grover Cleaver, a mortician, to find a corpse similar to William and dump it after the money is picked up. They agree to pay him 100,000$ once they receive the money.

William and Rusty raise the demanded price to five million, and Miss Crock agrees to pay. They line up the deal, and the drop goes off as expected. William gets the money, but as he is running away, he is mugged by two children, who stab him in the leg and shock him with a stun gun until he passes out.

William wakes up in the hospital. The plan has backfired – he has no money, and is locked in a hospital room, meaning they obviously know he isn’t dead. William and Rusty talk, and realize that Grover is still going to plant the body that is supposed to be William.

The police continue to investigate, and find the body, but this backfires too. Instead of them thinking it’s William, Grover made a mistake and picked a body so completely different looking from William, they assume it is the kidnapper, since he is wearing William’s clothing. However, the detective isn’t convinced and continues to investigate.

While working for Miss Crock again, the child that stole the suitcase full of money is forced to return it to him as a punishment from his mother. Following the luggage tag on the case, they find Miss Crocks house and deliver it straight to William.

William, assuming that he is in the clear, rushes to the Airport with Rusty and attempts to buy two tickets to Bali. However, they open up the suitcase… and it is full of garbage. There is no money, and Miss Crock never intended to pay the ransom, just wanted to appear like she paid it so her business would pick back up.

Meanwhile, Grover was seen by someone planting the fake William body. The city is covered in Wanted posters, and so he goes to Miss Crock’s house to get the 100,000$ he was promised. He starts shooting up her house with a shotgun and kidnaps her.

William and Rusty return to the house. Deciding that, money or not, he was going to quit his job, he comes to pack up his stuff. When they enter and can’t find Miss Crock, they get very worried. When Chip, Miss Crock’s business partner, comes out from around a corner, Rusty knocks him out with a lamp. However, Chip wakes up moments later and calls the police, who arrest William and Rusty.

While this is happening, someone attempts to buy flowers, but tries to buy them with a marked hundred dollar bill that was used in the ransom. But wait, wasn’t the suitcase full of just trash?

William and Rusty break out of the police station and steal a police car. Using the phone directory, they find out Grover’s address based on his answering machine message. When they arrive, they find Miss Crock tied up. The police are not far behind. William gets into an argument with Miss Crock about why she was only going to pay the ransom with a fake suitcase full of trash, when Miss Crock reveals that she paid every last cent of the ransom. She also reveals that William never was treated as well as his father was because his father was a male prostitute. They talk, and figure out that Chip was the one who stole the money used in the Ransom.

The police arrest Chip, and leave Rusty, William, Miss Crock and Grover in the clear. Miss Crock, thankful that Chip and Rusty rescued her, pays for them to both fly to Bali and open up a chicken wing restaurant. In addition, she ends up falling in love with Grover. 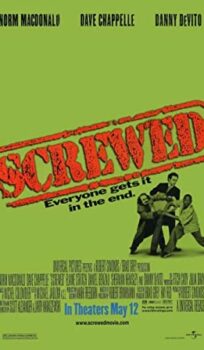