We all know the story of A Christmas Carol.
In this rendition, Frank Cross (Bill Murray, in arguably his best comedic performance) is a TV executive who could care less. But after being visited by the ghost of his former boss and the Ghosts of Christmas Past, Present, and Future, Frank realizes that it wasn’t his unhappyness that lack of Christmas spirit that made him a Scrooge, it was his indifference to the world around him. He comes back, rehires the man he fired, goes on the air live and publicly announces what a jerk he had been. His former girlfriend Claire (Karen Allen) comes to his side when she sees that he has truly changed, and Grace Cooley’s (Alfre Woodard’s) mute son Calvin, representing the Tiny Tim of this movie, gives the movie’s closing line, “God bless us, everyone.” 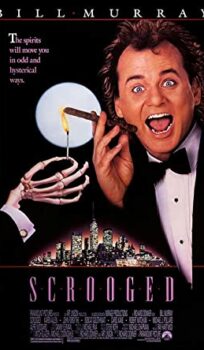