Red (Tobey Maguire) comes up with a special leg brace that allows him to participate in the last race at the Santa Anita track, riding Seabiscuit himself.  At the race, he comes upon George Woolf (Gary Stevens), who is also competing, although on a different horse, and they have a small pep talk.

During the race, Red and Seabiscuit fall behind, but then Woolf trails back to be with Red.  After a short conversation between them, Seabiscuit indicates he is ready to go, and so he does. Red guides him to gain momentum and catch up with the rest of the horses and eventually passes them to win the race.

The last shot shows the crowd gleefully cheering at Red and Seabiscuit, Howard (Jeff Bridges) and Smith (Chris Cooper) among them, while Red is heard in voiceover saying how the horse helped to fix the three men and how, in a way, they all helped each other as well. 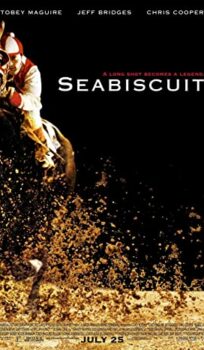