Behman [Nicolas Cage] and Felson [Ron Perlman] fight for years in the Crusades before becoming disillusioned by the killing of women and children. They are recognized as deserters on their way home through a land devastated by a plague and reluctantly agree to guard the group taking an accused witch to a remote abbey.

The accused witch is actually possessed by a powerful demon who wants to be taken to the remote abbey where the last copy of Solomon’s writing (containing the spells to conquer the demon) exists and which the demon is determined to destroy. The guide and a person in the group are killed along the way, and the priest, Behmen, and Felson are killed in the final battle with the demon and his cohort.

The girl is freed when Kay finishes the spell that destroys the demon. Only Kay and the girl survive. They bury the heroes and ride off, with a voice-over from the girl promising to tell the tale. 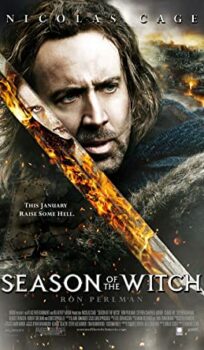