After the death of her mother, Denver housewife Penny Chenery-Tweedy (Diane Lane) travels home to her parents’ horse farm in Virginia.  There, she discovers that her ailing father (Scott Glenn) isn’t well enough to run the failing farm and turns her attention to making the farm profitable again.  She wins a new foal in a coin toss with millionaire Ogden Phipps.  The foal turns out to be horse with unusual speed and stamina and Penny lovingly calls him Big Red.  His racing name is Secretariat.

With the help of an eccentric trainer, Lucien Laurin (John Malkovich) and other staffers from the farm, Secretariat becomes a serious contender in the horse racing community.  While Penny’s deep involvement with working with Secretariat puts a serious strain on her family, they eventually come around to supporting her.

In 1973 Secretariat becomes the first horse in 25 years to win the triple crown – the Kentucky Derby, Preakness and Belmont Stakes. 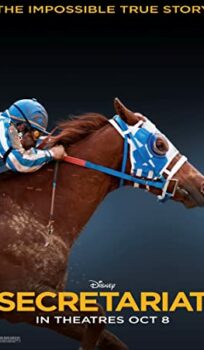