Seeking a Friend for the End of the World(2012)

Pooper:
Dodge and Penny go on a road trip and fall in love during their adventures as the end of the world approaches. There is non last minute salvation; they end up telling one another how much they love each other as the asteroid arrives and destroys the world.

Longer Version:
The world is threatened with destruction by a giant asteroid, and as the film starts the space mission intended to divert it has just failed, leaving 21 days left and no hope of salvation.

Dodge (Steve Carell) is an insurance salesman who is just being dumped by his wife as the announcement comes in. He continues to go through the motions of his life as the end approaches, seemingly aimless and resigned to whatever comes, but this changes when he meets his neighbour Penny (Keira Knightly). She reveals that she has been getting his mail by mistake for years and just let it pile up; amongst the letters is one by his old high school girlfriend, who he never really got over, telling him that she considers him the love of her life.

Dodge and Penny set out on a road trip, she helping him to find the woman and he helping her to a friend who has a plane and may be able to fly her to England to be with her family for the end. Along the way they fall in love. They arrive at Dodge’s old girlfriend’s house but he decides not to go in, instead leaving a letter on the doorstep for her to find. He refuses to tell Penny why, but it’s obvious that he has put the memories behind him because of his feelings for Penny.

They arrive at Dodge’s friend, and it turns out to be his father, who he hasn’t spoken to in 25 years. Dodge reconciles with his father and they put the sleeping Penny into his plane to fly off as Dodge returns home. The news reports that the asteroid is in fact seven days closer than thought, and there are now only 16 hours remaining. Dodge is surprised to see Penny arrive, having abandoned her trip, and the two lie in bed together telling one another how much they love each other. Penny cries, saying “I thought we would be able to save one another somehow,” and Dodge smiles and says simply “We did.”

With that, the asteroid arrives, and the Earth is destroyed. 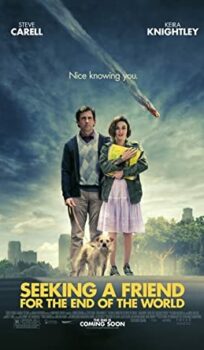