Selena (Jennifer Lopez) marries her guitarist Chris Perez (Jon Seda), becomes the best-selling Tejano recording artist ever, and eventually wins a Grammy for Best Tejano Artist. She starts up her own clothing boutiques and fan club, and gives the day-to-day business handlings of both to her biggest fan Yolanda Saldivar (Lupe Ontiveros). However, Yolanda falls out of favor with Selena when fans begin to complain about not being given anything in return for paying for fan club membership, plus a series of suspicious checks and some missing financial records came to light that indicated that she was stealing from Selena. She immediately loses Selena’s trust and looks to be fired.

While Selena was working on her English language album, she meets up with Yolanda in a Corpus Christi hotel on March 31, 1995 to retrieve some of the records, and Yolanda shoots her in the back. Selena manages to get to the lobby to tell the receptionist that Yolanda shot her before collapsing. Yolanda is arrested, and Selena is taken to the hospital, where she dies. She was sixteen days shy of turning 24.

It last shows the candlelight vigils of Selena’s fans while video clips of the real Selena are played in between them.

*Yolanda would be tried and convicted in the same year for first-degree murder and sentenced to life in prison with possibility of parole in 30 years. Selena’s English language album would be released a few months after her death and debuted at #1 in the U.S. Billboard Top 200, making her the first Hispanic singer to achieve this accomplishment. 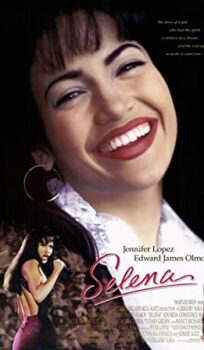