Marcel the Shell with Shoes On

New York-area real estate magnate Damian Hale (Ben Kingsley) is dying of cancer. On his deathbed, he finds a business card in his pocket for a Dr. Albright (Matthew Goode). Damian looks him up and discovers he runs a company that performs a radical medical procedure called “shedding”, which transfers the consciousness of a person into an artificially created body. Dr. Albright tells Damian that the procedure is irreversible, and your old body will be publicly pronounced dead. While Damian is considering the offer, he looks up Dr. Francis Jensen, the man who developed shedding. As he is learning about Dr. Jensen, Damian’s health begins to worsen. With no family to speak of except an estranged daughter, he decides to go ahead with the procedure. Dr. Albright arranges for Damian to travel to New Orleans, where the office is located, and to also meet his old business partner Martin (Victor Garber). Before the meeting, Damian goes to a nearby cemetery and buries a box near a crypt. Now at a restaurant catching up with Martin, Damian collapses and is placed in an ambulance. But instead of going to a hospital, the paramedics are actually employees of Dr. Albright, and this is part of their plan to make Damian publicly dead.

At Dr. Albright’s office, the shedding procedure occurs, and Damian’s consciousness is successfully transferred into the body of a healthy young man (Ryan Reynolds). Damian’s old body is secretly taken to a morgue and his obituary is publically released. As Damian is adjusting to his new body, he is given a medication that will lessen any hallucinations that might occur, something Dr. Albright writes off as a side effect of the procedure. One night, Damian forgets to take his medicine, and he begins to suffer severe hallucinations. In those hallucinations, he sees soldiers, a woman and her daughter, and a water tower painted like a pumpkin. He tells Dr. Albright about these hallucinations, but he tells him not to worry about them. However, he knows things about them that Damian didn’t tell him about. Now thinking these hallucinations may actually be memories, he does a Google search of the water tower, and he sees it actually exists near St. Louis.

Damian travels to St. Louis and finds the water tower. Next to it is a home that he also saw in his hallucinations. He goes inside, and he sees pictures of himself as a soldier, and also in ones with the woman and daughter. The woman comes home, and is shocked to see Damian, who he learns is actually her late husband Mark. Her name is Maddie (Natalie Martinez) and their daughter’s name is Anna. Mark actually sold himself to Dr. Albright for scientific research, and the money was used for Anna’s life-saving treatment. Later, Maddie was told that Mark died in an accident. Just then, several of Dr. Albright’s men arrive at the home and attack them. Damian, remembering Mark’s military training, fights back against the henchmen, but he loses his medicine in the process. They then travel to Anna’s school to protect her from any other henchmen and to get to safety.

Now at a hotel, Damian continues his research into Dr. Jensen. While watching a video of him, he sees that he has a tic that Dr. Albright also has. He quickly figures out that Dr. Jensen shed himself and is now Dr. Albright, and the “artificially created” bodies are real people. The trio travel to New Orleans to confront Dr. Albright. With Maddie and Anna waiting in her car, Damian meets Dr. Albright, who promptly gives him more medicine, telling Damian the medication is actually used to kill the consciousness of the original host body. But if he stops taking it, Mark’s consciousness will return and Damian’s consciousness will die. Dr. Albright also brought more henchmen who try to kill Damian/Mark again, but he escapes. As they flee, Damian tells Maddie what actually happened to Mark, which she finds hard to believe. He says he can prove it, and they travel to the cemetery and he retrieves what he buried there, then they meet Martin at his house. Martin is also skeptical of Damian/Mark’s claims, but when he produces the item that was buried (the deed to their first-ever real estate purchase), and also tells him personal things that only Damian would know, Martin comes around.

While Damian and Martin are arranging for the trio to flee the country in his boat, Anna begins playing with Martin’s young son Tony. Damian is shocked to see this, since Tony died two years ago. Martin then reveals that he also went to Dr. Albright to use his services to shed his son, and he arranged to have the business card hidden in Damian’s pocket when he learned of his terminal cancer diagnosis. However, he is disgusted when he learns the truth about the “artificially created” bodies. He also tells Damian that Dr. Albright and his men know they are there and are on their way. Damian takes Martin’s car and drives off, while Martin takes Maddie and Anna into the nearby woods to hide. Damian/Mark is able to defeat the henchmen, but Maddie and Anna are captured anyway. Damian decides to stop taking the medicine, hoping to find a memory of Mark’s that will reveal the location of the lab. It works, and he learns that it’s in an abandoned warehouse across the river.

Damian travels there, but is promptly caught. Dr. Albright tries to shed the mind of Anton, his lead henchman, into Mark’s body, but Damian remembered that having any metal on his person will prevent the transfer from occurring, so he hides a bullet in his mouth. The shedding occurs, and Mark, pretending to be Anton, orders Maddie and Anna released. He then kills the henchmen and confronts Dr. Albright. He tells the doctor that Martin was able to reverse-engineer the pills, so he doesn’t need his medicine anymore, and Dr. Albright is killed. The next day, Damian places Maddie and Anna on Martin’s boat and tells them to sail into the Caribbean. Damian then travels back to New York and, as Mark, meets his estranged daughter Claire (Michelle Dockery). He says that he knew Damian and was instructed to give her a letter after his death. In the letter, Damian reconciles with Claire, and Mark leaves. He goes to a hotel room and throws away the medicine. Days later, Damian/Mark wakes up and sees a laptop with a “play me” note attached. The video is of Damian thanking Mark for the use of his body and the extra time it gave him. By the time the video is viewed, Damian’s consciousness will be dead, and Mark’s consciousness will have fully returned. The movie ends in the Caribbean, where Mark, without Damian, reunites with Maddie and Anna. 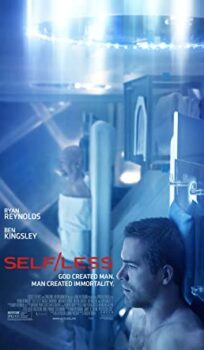