The Flint Tropics are told that no matter what, the team will not merge into the NBA. Wanting to finish strong, the team decides to try to beat the Spurs to get 4th place. Jackie Moon (Will Ferrell) trades Coffee Black (Andre ‘3000’ Benjamin) to the Spurs to insure Coffee gets his dream of going pro.

Jackie promotes the game and manages to get a sell-out crowd for the game. While playing, Jackie gets knocked out and sees his mother in heaven (Patti LaBelle). She tells him about a secret move that will win the game. During which, Coffee goes back to the Tropics, forfeiting his chance at the NBA. Jackie wakes and tells the team about the move which turns out to be the alley-oop. During a foul shot, Monix (Woody Harrelson) alley-oops Jackie’s missed shot to win the game.

Monix’s ex-girlfriend (Maura Tierney) goes back to him, the Spurs’ coach chances his mind and lets Coffee stay in the NBA, the ABA commissioner get attacked by the bear Jackie fought earlier and the hippy (Jackie Earle Haley) gets $2500 of the grand prize he should have gotten earlier for making a full court shot. 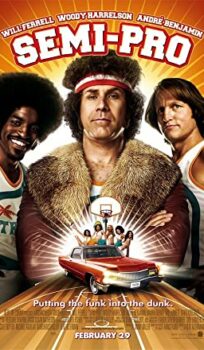