SHORT VERSION:
Adam hosts a great Senior Skip Day party and gets the love of his crush Cara, and he also prevents Dickwalder from busting him and the other seniors and makes him look like a foolish heel of a principal. Dickwalder ends up running off to Burma with the escaped convict Lionel, who bought the booze for the party.

LONG VERSION:
Mark (Russell Howard) eventually notices that Ralph (Derek Mio) – the guy who was originally going to host the Senior Skip Day party until Adam (Gary Lundy) accidentally spilled the beans about it within earshot of Principal Dickwalder (Larry Miller) – is not in attendance at Adam’s party, so he finds Adam and has him re-send an invitation to Ralph since he needs to be there more than anybody. Unfortunately, Ralph’s phone is in the Lost and Found box at the school, and the secretary Ms. Minn (Karen McClain) hears the phone go off, so she checks it and sees the invitation. She then calls Dickwalder and tells him that she has discovered that Adam is hosting the new Skip Day party. Distraught because he believed Adam was a decent kid for ruining the original party, Dickwalder drives straight to his house.

Meanwhile, Adam finds himself connecting very well with his crush Cara (Kayla Ewell), but when she asks if he is a virgin (like her), he lies and says that he isn’t out of fear of coming off as a loser. Soon after, her boyfriend Scott (Talan Torriero) approaches her and, on a suggestion from his friend Carl (Brett Claywell), he lies about being a virgin himself in the hopes that she will immediately want to lose their virginity together. Out of her love for him, she buys the lie and heads to an upstairs bedroom with him to do the deed. Adam believes that he has blown it with Cara until Tate (Chuck Carter) urges him to go up there and stop them and stake his claim, but when he gets up to the room, he finds Cara about to be penetrated by Scott. Presuming that he is too late, he heads back downstairs and, in open view, starts making out with one of the drunken models he and his friends hired to entice the seniors to attend, but that gets ruined when he accidentally fingers his Chihuahua, Lucy, up its butt in the midst of it. However, what Adam doesn’t know is that, shortly after he left Scott and Cara alone, Scott accidentally called Cara “Laura” (Lindsey Axelsson), a girl whom he used to date openly but has been secretly cheating on Cara with for a long time now. Cara concludes that he has been unfaithful to her, so she pushes him off of her and dumps him. She heads downstairs and comes across Adam just after he has fingered Lucy, and Scott then appears. Cara dismisses him again, so he calls her a tease, prompting Adam to come to her defense. Scott challenges him to do something, after which Mark steps in and knocks him out with a single punch, telling Adam afterwards that he had been waiting to do that all day.

Adam’s mother Cathleen (Lea Thompson) and sister Ellen (Tara Reid) then return home from work. As Cathleen tries to get over the sight of the house being trashed (Ellen knew the party was going on but supported Adam, since she hosted a Skip Day party at the house herself several years ago), Adam tells her that he has “seized the day” like she earlier encouraged him to do. He gives her a rundown on the party and all of the crazy activities he did relating to it, and he also brings up Cara and how amazing she is and how he is sorry for lying to her. Then, there is a knock at the door, and Ellen checks it out and whispers that Dickwalder is outside, and Adam tells his mother about how he is insane and is going to kill any college opportunities they have if he catches them (he had already terminated Ralph’s admission to Harvard). He then hides his classmates just before Cathleen answers the door, and as he keeps himself out of Dickwalder’s view, he coaches a lie for her to tell Dickwalder, saying that he and the other seniors have been at Lamar’s (Texas Battle) brother’s funeral all day and that she had dropped Adam off herself.

After she provides the address of Lamar’s aunt’s house where it is being held, Dickwalder starts to leave, but the escaped convict Lionel (Clint Howard), who bought the booze for the party, confronts him. He reveals that he and Dickwalder were in the same senior class in high school, and he was going to host their class’s Skip Day party until Dickwalder ratted him out to their principal, which ended up ruining his chances of going to a technical college and began his downward spiral right into prison. He had been wanting to meet with him all day because he now plans to open a barbecue restaurant, and as he produces a large knife, he says he wants to cut his head off and put it on the menu. Dickwalder fearlessly puts the knife to his neck and tells him that he can find a better life in Burma, and then he departs.

Adam then has Ellen drive him and the seniors to the funeral in Snippy’s (Jackson Rathbone) Winnebago, and they make it there ahead of Dickwalder. When he enters shortly afterwards and finds the seniors, he shouts his firm belief that this funeral (which he knew about before he talked to Cathleen but believed it to be bogus) is just a front for the Skip Day party and the mourners are extras in the charade. However, when he opens the casket believing that the alcohol is stashed in there, he realizes how incorrect his accusation is, and he gets promptly beaten up by Lamar’s father and tossed out of the house. Moments later, Lionel pulls up in his car and asks him to tell him more about Burma, so Dickwalder decides to go with him, apparently considering his career to be finished now.

In the final scene, Adam breaks the fourth wall (a recurring theme in the film) and says that he finds it ironic that Dickwalder went through hell to try to punish him and the seniors for skipping school and wound up skipping off to Burma with Lionel, but he is somewhat proud of him for doing that. Cara shows up and jokingly asks the audience if they are sick of listening to Adam, and as he starts to extoll the importance of how you need to grab hold of true love when you see it, Cara tells him to shut up and kiss her, and he obliges her. 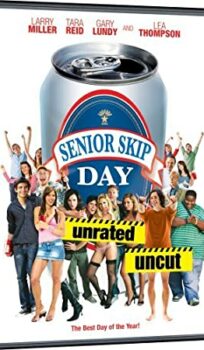