SHORT VERSION:
After his experience with the experimental drug goes awry, Darryl decides to study for the Smythe-Bates junior analyst competition without it. He makes it to the final two with his enemy Scott, and when they are given their final question, Scott gives an answer but cannot provide a reason why it is the right answer (which is a weakness of his). Darryl does what Scott couldn’t and wins, but then he confesses to the crowd that, while he did study hard for this competition, he only made it to this point through using an experimental drug. He tells Mr. Tyson and Mr. Bellweather, the heads of Smythe-Bates, that he was willing to do anything to become a Smythe-Bates man, even the wrong thing, and he feels he deserves the job even though he didn’t get it honestly.

After conferring over the matter with the company’s board, Tyson later tells Darryl that no one will be getting the junior analyst position this year. However, he does consider him the most impressive candidate, so he has decided to give him a job in the company’s mailroom (which was where he himself started out), and says that, if he puts in a year’s worth of hard work there, then he will make him a junior analyst. A year later, Darryl successfully completes the work term and gains the junior analyst job, and he and Tyson’s daughter Janice are in a relationship.

LONG VERSION:
One night, Darryl (Marlon Wayans) cockily goes against Dr. Wheedon’s (Brad Dourif) orders about not exceeding his daily dosage of the Protocol 563 drug and takes a double dose, and the next morning he wakes up having lost his sense of touch. After telling Dr. Wheedon about this, he explains that a flood of serotonin has desensitized his receptors, and the neural plasticity of his brain has compensated by allowing him the use of only four of his senses at any given time with the missing one constantly switching. It can only be fixed by just letting the drug pass through his system, which will happen in three days, which is bad news for Darryl because the Smythe-Bates junior analyst competition is on the third day.

During the course of the three days, his switching senses make him lose points with Mr. Tyson (Rip Torn), the head of Smythe-Bates, and his burgeoning relationship with Janice (Tamara Taylor) suffers as well when she catches him (unsuccessfully) cheating on her with Lorraine (Kenya Moore). It is made even worse when he discovers that Tyson is her father when he goes to her apartment to apologize. The night before the competition, Darryl asks for Tim (Matthew Lillard) to help him study for it, since he can’t rely on his enhanced senses anymore. Meanwhile, his foe Scott (David Spade) studies in a different location, and he exposes himself as a man who, while usually making correct answers to questions, cannot give any good reasons as to why they are the correct answers.

Darryl makes it to the competition just as the last of the drug finally leaves his system, despite his appearance looking less than professional due to a series of unfortunate events on the way there. He ends up making it to the final two with Scott (and Janice and Tim show up at that point to support Darryl), but when given their last question, Scott gives an answer but cannot provide the reason why it’s the right answer. Darryl, however, does what Scott couldn’t, and therefore Tyson declares him the winner. Darryl takes the podium for his victory speech, but after some thought, he confesses to everyone that, while he did study hard for this contest, he only made it to this point through the aid of an experimental drug. He tells Tyson and Mr. Bellweather (Richard McGonagle) that he was willing to do anything to become a Smythe-Bates man, even the wrong thing, and he feels he deserves the job even though he didn’t get it honestly.

Scott is cut off financially by his father for losing. Tyson confers with the board of directors in private, and later on, he tells Darryl that no one will be getting the junior analyst position this year. However, he does consider Darryl to be the most impressive candidate, and he reveals to Darryl that he started out in the mailroom of Smythe-Bates and came from a background similar to his. He therefore tells Darryl that, upon graduation, he will be given a job in the mailroom, and if he puts in a year’s worth of hard work there, he’ll become a junior analyst.

A year later, Darryl is having a party with Janice and his family for having completed the mailroom job and becoming a junior analyst. Tim has embraced an African-like lifestyle and is also now dating Lorraine. Darryl later moves his mother into a deluxe apartment on the East Side, and the movies closes with him reporting for his first day on the job, and Sherman Hemsley is shown playing the company’s doorman. 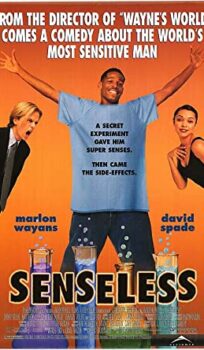