After having realized that Ann (Rita Heyworth) lied about not knowing he was engaged, John (Burt Lancaster) has a huge argument with her and storms out into the night.

The next day, the Major (David Niven) meets Sibyl (Deborah Kerr) out in the gardens and discovers everyone at the hotel now knows he lied about his military record and about being arrested for bothering women in a movie theater. He tries to explain how frightened he is of people, and especially women, and tells Sibyl how especially sorry he is that she’s been hurt by all this. He tells her he’s going to leave.

John comes back, and Miss Cooper (Wendy Hiller) tells him that Ann has been taking drugs and lied about being engaged. She points out that John is clearly still is in love with Ann, and that the two need each other. She also then tries to convince the Major not to leave.

John goes to Ann, and the two decide to give it another try even though they both know their chances are slim. The Major comes into the dining room and takes a seat. At first it’s very awkward and uncomfortable, but then, one by one, everyone tells him good morning and chats with him. Sibyl’s mother is offended, and gets up to leave and asks her daughter to come with her, but Sibyl finally stands up to her and tells her no, and remains in the dining room. The Major’s taxi arrives but he sends it away and he and Sibyl share a smile. 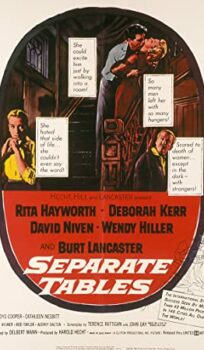