An Operative (Chiwetel Ejiofor) renews the Alliance’s attempts to kill River (Summer Glau), so the crew of Serenity goes on the run. River’s occasional blackouts lead them to a planed called Miranda, where they discover that when River was a prisoner of the Alliance, she learned their darkest secret; that the Reavers were actually created by an Alliance colonization experiment gone awry. Shepherd Book (Ron Glass) and Wash (Alan Tudyk) are killed in the attempt to inform the people of their government’s betrayal. Mal (Nathan Fillion) transmits proof of the Reavers’ origins to the ‘verse, which weakens, but does not destroy the Alliance. The Operative, having his system of beliefs utterly shattered, allows Serenity to escape.

In other plot threads left dangling from the TV series, Kaylee (Jewel Staite) and Simon (Sean Maher) hook up, Mal and Inara (Morena Baccarin) show some legitimate affection for each other, and River, with the catharsis of getting the secret of the Reavers out of her head, seems to have recovered her sanity (and also seems to make a fine pilot, now that Wash is gone). 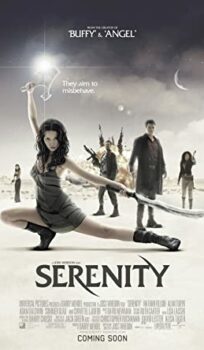