The film follows a non-linear structure and jumps, repeatedly and inconsistently back and forth, in time; the best way to synthesize a pooper from its storyline is this one:

Sergio Vieira De Mello (Wagner Moura) was a Brazilian Diplomat with a long and distinguished career within the United Nations, as a mediator and supervisor of diverse humanitarian efforts. He is divorced and has two sons whom he doesn’t see very often, due to the constant travelling that derives from his work. He is in a relationship with co-worker Carolina Larriera (Ana De Armas), but his passion for making the world a better place with his efforts has him at odds with Carolina, who longs for a life with him in Rio De Janeiro, where he was from.

One of his last efforts in his lifetime gets prominently depicted in the film: him being the Transitional Administrator in East Timor, when this country, after a bloody and protracted struggle with Indonesia, achieved its independence in 2002. Sergio is shown, in separate occasions, conferencing with the East Timorese leader of independence Xanana Gusmao (Pedro Hossi) and the Indonesian President (Vithaya Pansringam), achieving negotiations for the success of this endeavour.

In 2003, and against Carolina’s advice, Sergio accepts being sent to Baghdad, in order to help the Iraqi people in post-Saddam Hussein Era and negotiate a successful exit of the American military troops. His methods find him at severe odds with Paul Bremer (Bradley Whitford), the appointed Leader of the CPA administrating Iraq; and his closest fellow Diplomat Gil Loescher (Brian F. O’Byrne), who fears it’d put all UN staff in grounds at severe risk. One such action is Sergio’s decision to remove the US Guard security detail from the UN Base Camp, “so the UN wouldn’t be seen as part of the Occupation contingent”.

He becomes a victim -along with Gil and many others- of the Canal Hotel suicide truck bombing, that same year. Intertwined with his life and work throughout the film are scenes of him trapped under the rubble and being tended to by Army Reservist William von Zehle (Garrett Dillahunt), while his personal bodyguard Gaby (Clemens Schick), Carolina and other survivors of the attack wait and watch helplessly, nearby.

Eventually, Sergio, along with 21 more people, died from this incident. The final sequences show former UN Secretary General Kofi Annan -whom, according to many, Sergio could’ve become a successor to, hadn’t he been killed- giving an eulogy for him, as well as images of the real Sergio, when he was first appointed for the job. Title cards, before the end of the film, inform that, shortly after Sergio’s death, the UN pulled out of Iraq, causing the descent of the country into its well-known long Civil War; Abu Musab al-Zarqawi -leader of al-Qaeda in Iraq and subsequent founder of ISIS- claimed authorship of the suicide bombing; and Carolina returned to Rio, was declared Sergio’s civil spouse and continued with her activism work. 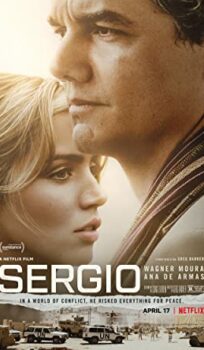